“No human being is illegal on stolen land,” read the woman’s sign. Ellison posed for the picture, which was shared on Instagram, at an anti-Trump “Rise and Resist” march on June 20. 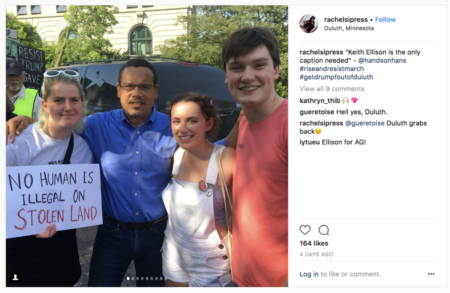 A spokesperson for Ellison has not yet returned an email inquiring whether the congressman endorses the sign’s open borders message.

The congressman has a history of endorsing fringe political candidates and messages.

Ellison in May was caught on video wearing a t-shirt that read, “yo no creo en fronteras,” which translates to: “I don’t believe in borders.”

Ellison is vacating his seat in Congress in order to run for attorney general of Minnesota, although he will remain the DNC’s number two official.