Thinking they had a rising star and a dream counterbalance to President Trump, Democrats propped up Massachusetts Rep. Joe Kennedy III as their choice to provide a response speech to yesterday evening’s State of the Union address.

It was an unmitigated disaster.

Much like Marco Rubio’s water grab during his 2013 speech, Kennedy left everyone talking about anything but his message.

Specifically, what the hell was coming out of his mouth?

Sure, Democrats were hoping Kennedy would have everyone talking about their Party’s support for criminal illegal immigration, how they view $2,000 bonuses as ‘crumbs,’ encourage voter fraud, and despise the National Anthem, but instead, the conversation was all about his lips.

Politico reported, “The Democratic congressman’s mouth corners appeared especially shiny during his response to President Donald Trump’s State of the Union address — and many online were quick to accuse him of drooling during his address.”

Damn it – How are we supposed to sort through all the lies being told in the Democrat response if we have to stare at that the whole time?

Marco Rubio had dry-mouth during his #SOTU response in 2013.

Seriously, nobody on your staff had the time to run up there and give you a quick pat down with a ShamWow? 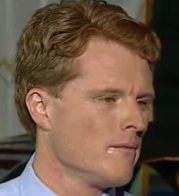 The last time a Kennedy was this damp, a car was sitting in the bottom of chappaquiddick

“Decided to go a little bit light on the ChapStick this morning … which is probably a wise choice,” he joked on Good Morning America. It was “a little too much, apparently.”

Speaking of Chapstickquiddick – Who’s the staffer who decided it’d be a great idea to put a Kennedy in front of a wrecked car? You have to assume it was the same staffer who failed to be at the ready with the face ShamWow.

Bravo to the Dem advance staffer who decided to put a Kennedy in front of a car wreck on national TV.

Kennedy III’s great uncle, Ted Kennedy, was long stigmatized by his friend Mary Jo Kopechne’s death at Chappaquiddick, which he caused by driving drunk off a bridge and fleeing the scene while she drowned in his car.

So yeah, awesome visuals of a super wet Kennedy family member standing in front of a car wreck, there Democrats.

Maybe next time just have Bill Clinton’s nephew deliver the speech in front of an ‘interns wanted’ sign. might be more subtle.

What did you make of Kennedy’s speech last night? Give us your assessment below!