Democrats on the campaign trail for the midterms are finally getting a helping hand from the woman who wouldn’t defeat Donald Trump.

Already being out-fundraised by Republicans by a ratio of 2:1, Democrats are desperate for any political capital they can get. So far for the 2018 cycle, the DNC has raised $110 million, compared with $213 million taken in by the RNC. Hillary has spent most of her time in the post-election spotlight complaining about her loss (which she’s since narrowed down to approximately one bazillion different variables) or promoting her book about her loss. Ironically, that book of hers answers the question it poses on the front cover, on the front cover. 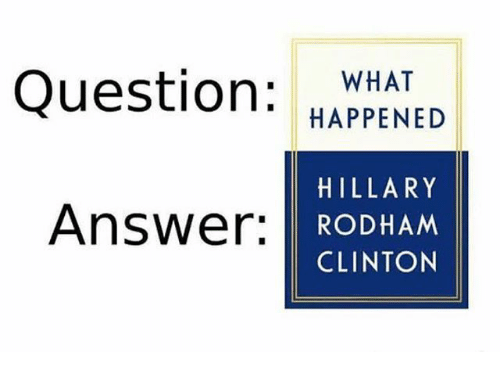 According to NBC News: Hillary “will headline three events — in San Francisco, Chicago, and New York — for the DNC this fall to boost the party’s chances of seizing control of the U.S. House and Senate. Billed as ‘intimate dinners with discussion,’ the first invitations were set to go out Monday night for a September event in San Francisco.” All of the fundraisers will be closed to the press, so we in the public won’t get much more insight into them.

She’s also reportedly planning on hosting fundraisers to benefit the candidates she supports. So far, Hillary has personally donated the maximum allowed by the FEC ($5,000) to 19 Democrat House candidates that are running in Republican-controlled districts that Hillary won in 2016. Given that the American public didn’t want her to be president, one can only wonder why Demcorats want her by their side when it comes to the most critical midterm elections they’ve ever faced. Perhaps that’s why despite these fundraisers, Hillary has yet to make a single public appearance to support a candidate.

Other Democrats have taken more extreme measures to try to plug the fundraising gap. Former NYC Mayor Michael Bloomberg is planning on spending a whopping $80 million in an attempt to flip the House, and George Soros is spending more on the 2018 midterms than any prior midterm elections.

It’s interesting to note that while the Republicans fundraising has come mainly in the form of small individual donations, it’s the Democrats that are relying on billionaire money to stay afloat.