Gun Control: This Is How it Begins and Why It’s So Dangerous

Proponents of the Second Amendment have long held the belief that once government starts confiscating certain kinds of weaponry, it will create a very dangerous and slippery slope.

California senator Dianne Feinstein recently released a gun control bill that would place a ban on over 200 types of semi-automatic weapons, as well as magazines holding more than ten rounds of ammunition.

So what happens if we as a nation go down that harrowing road of overturning the Second Amendment? 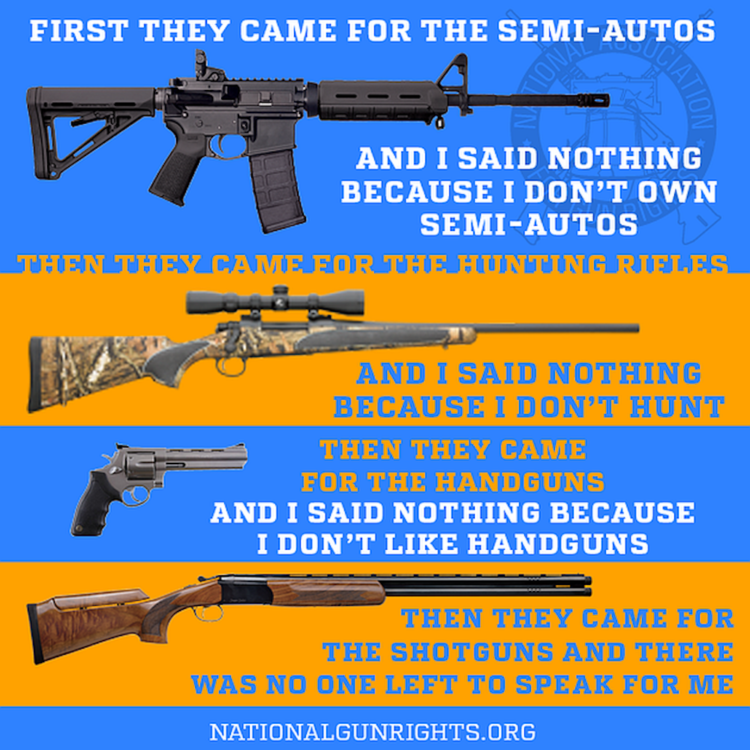 This meme is a play on the poem “First They Came …” a famous rumination on the Holocaust that lambastes those who remained silent while the Nazis were rising to power and killing off groups of people.

Ironically, some have argued that gun control in Germany helped aid the Nazis rise to power with little resistance from the populace.

“The perennial gun-control debate in America did not begin here,” writes Stephen P. Halbrook of the National Review. “The same arguments for and against were made in the 1920s in the chaos of Germany’s Weimar Republic, which opted for gun registration.”

“Law-abiding persons complied with the law, but the Communists and Nazis committing acts of political violence did not,” he explained.

When they’re done with our guns, will they stop at banning anything?

First they came for the conservatives, Then the Republicans, Then the Christians, Now. White people. This is not a battle of ideas it’s war.

So think about that as Democrats like Feinstein try to ban and/or confiscate what you rightfully, by the Constitution, own. All because somebody who slipped past already implemented laws, already implemented background checks, and poorly instituted mental health screenings, misused that right.

Will liberals stop at just certain kinds of guns to ban if they have their way? Share your thoughts below!

Ben Shapiro Explains How to Beat Liberals in Debate Every Time