Apparently the requirement list for Congressional Republicans to pass an Obamacare repeal bill has only one listing: a Democrat president in office who will inevitably veto it. The Republican-controlled House of Representatives in particular voted fifty separate times on Obamacare repeal legislation during Obama’s presidency.

While Congressional Republicans promised an Obamacare repeal bill on President Trump’s desk for him to sign on day one, we didn’t see one until April, which a vote wasn’t even held on because it was guaranteed to fail. A quasi-repeal bill did eventually pass the House by a vote of 217-213. It failed in the Senate thanks to Sen. John McCain and two other Republicans.

The latest proposed repeal bill is “Graham-Cassidy,” named after Republican senators Bill Cassidy and Lindsey Graham. This bill met with opposition from the same senators who voted against the last repeal attempt – plus Rand Paul and Ted Cruz. Like the past quasi-repeal, Graham-Cassidy is a faux Obamacare repeal.

Calling a bill that KEEPS most of Obamacare "repeal" doesn't make it true. That's what the swamp does. I won't be bribed or bullied.

And now, rather than hold a vote on the bill, it appears that senators Cassidy and Graham are going to revise their legislation entirely.

According to the Washington Examiner, Sen. Cassidy told ABC’s “This Week” that he and his colleagues will introduce a new version of the bill today. Cassidy said that the Congressional Budget Office’s scoring of the bill would be available Monday, and revision would be based off of that. The CBO’s score projects the expected effects of the repeal in terms of costs and benefits.

Senate Majority Leader Mitch McConnell said that he intends to bring a vote on the revised Graham-Cassidy bill this week. It’s still unclear what changes will be made, but presumably they’ll address the concerns of Republican detractors.

We’ll see what changes Cassidy adds to bill. After John McCain’s defection, however, it’s going to be very difficult to bring in more senators. I suspect many Republicans would rather let Obamacare remain in place.

If this repeal attempt fails, I believe the meme below is especially relevant….. 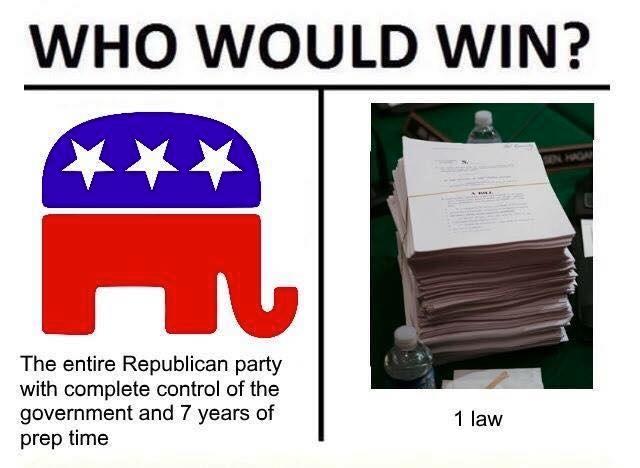 What do you think? Will that meme prove accurate? Tell us your thoughts below on the chances for Obamacare repeal and share this story on Facebook and Twitter!