96% of Google Search Results are Anti-Conservative

You already know that the media has a liberal bias, as it’s pretty hard to miss for anyone that’s turned on their television, opened up a newspaper, or heard a celebrity open their mouth.

The internet initially helped burst that bubble. With a free and open internet, anyone is now open to criticism, and in theory, the best ideas should win out in the end.

Unfortunately, it’s nearly impossible to navigate the internet today without a major search engine, such as Google. And while there could be 10 stories with a conservative perspective on a certain issue and one with a liberal point of view, Google can alter the search results, so that the conservative perspectives are buried pages back in the results.

While over 90% of the mainstream media’s coverage of the Trump presidency has been negative, the search engines are even more lopsided. As PJ Media’s Paula Bolyard reported, they ” performed a Google search for “Trump” using the search engine’s “News” tab and analyzed the results using Sharyl Attkisson’s media bias chart (pictured below).” 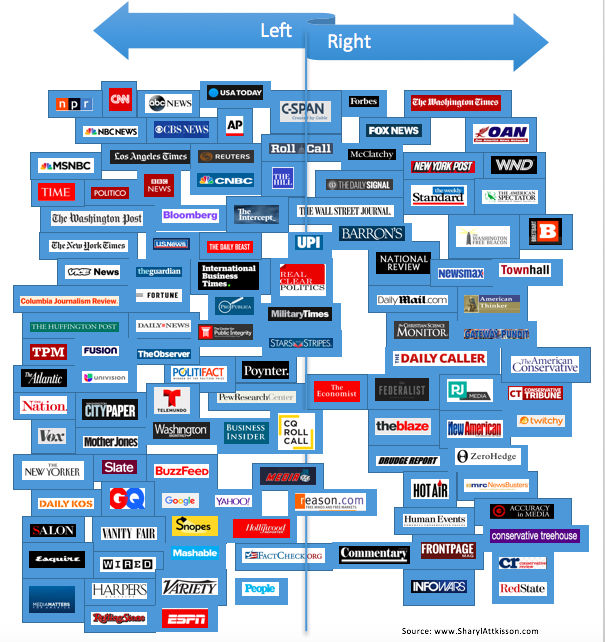 And not surprisingly, the disproportionate number of results came from those on the left. “Looking at the first page of search results, I discovered that CNN was the big winner, scoring two of the first ten results,” Bolyard found. “Other left-leaning sites that appeared on the first page were CBS, The Atlantic, CNBC, The New Yorker, Politico, Reuters, and USA Today (the last two outlets on this list could arguably be considered more centrist than the others). Not a single right-leaning site appeared on the first page of search results.”

When she analyzed the first 100 items that Google returned in a search for news on Trump, “CNN, by a wide margin, appeared most frequently, with nearly twice as many results returned as the second-place finisher, The Washington Post. Other left-leaning outlets also fared well, including NBC, CNBC, The Atlantic, and Politico.” The Wall Street Journal and Fox News appear only three, and two times, respectively. Meanwhile, nearly 30% of all results were CNN articles. 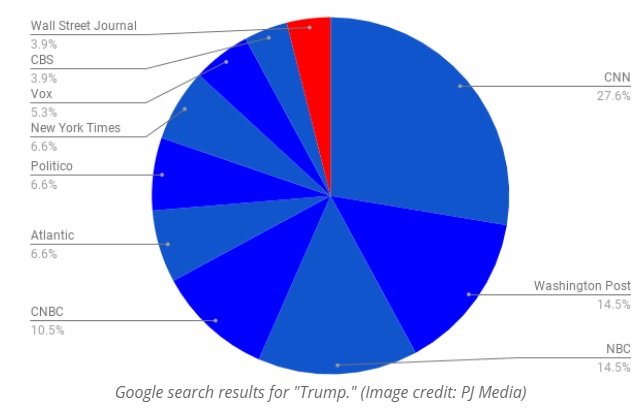 While this is a relatively simplistic analysis, professional firms have yielded similar results. San Francisco based SEO company “Can I Rank” studied over 1,200 web pages that ranked highly in Google search results for politically-charged keywords (such as “gun control,” “abortion,” and “Black Lives Matter”) and then assessed the political slant in the results. “Among our key findings were that top search results were almost 40% more likely to contain pages with a ‘Left’ or ‘Far Left’ slant than they were pages from the right,” Can I Rank found. “Moreover, 16% of political keywords contained no right-leaning pages at all within the first page of results.” They sampled 2,000 results and found that searchers are 39 percent more likely to be presented with left-leaning articles.

Google search results for “Trump News” shows only the viewing/reporting of Fake New Media. In other words, they have it RIGGED, for me & others, so that almost all stories & news is BAD. Fake CNN is prominent. Republican/Conservative & Fair Media is shut out. Illegal? 96% of…

….results on “Trump News” are from National Left-Wing Media, very dangerous. Google & others are suppressing voices of Conservatives and hiding information and news that is good. They are controlling what we can & cannot see. This is a very serious situation-will be addressed!

This isn’t the first time this has happened. During the Presidential election, Google was caught altering search results to prefer Hillary Clinton over Donald Trump.

Even when conservatives try to fight liberal media bias by creating content of their own, Google can still do everything in their power to prevent anyone from seeing it. Not only does the left make the news in America – they control it.