Her tweet said: “I’m happy the witch is dead and I can’t wait for the rest of her family to fall to their demise the way 1.5 million iraqis [sic] have byyyeeeeeeee [sic].”

If that wasn’t bad enough, Jarrar continued her shameful rant, noting Bush was an “amazing racist who, along with her husband, raised a war criminal” while dancing on her grave.

Jarrar shamelessly took aim at the grieving Bush family and noted she couldn’t care less about the backlash of her comments: “All the hate I’m getting ALMOST made me forget how happy I am that George W. Bush is probably really sad right now,” she blathered.

A Professor who makes such outrageous comments would be fired immediately, right? Think again. Fresno State released an official statement, and they are refusing to condemn. This is from Fresno State President Joesph I. Castro:

On behalf of Fresno State, I extend my deepest condolences to the Bush family on the loss of our former First Lady, Barbara Bush.

We share the deep concerns expressed by others over the personal comments made today by Professor Randa Jarrar, a professor in the English Department at Fresno State. Her statements were made as a private citizen, not as a representative of Fresno State.

Professor Gerard’s express personal views and commentary are obviously contrary to the core values of our University, which include respect and empathy for individuals with divergent points of view, and a sincere commitment to mutual understanding and progress.

It’s clear Jarrar knew she would face no repercussions. As she arrogantly tweeted in response to demands of her firing: “LOL! Let me help you. You should tag my president @JosephICastro. What I love about being an American professor is my right to free speech, and what I love about Fresno State is that I always feel protected and at home here. GO BULLDOGS!”

She has since made her Twitter account private, but not before these screenshots of her infamous tweets were captured: 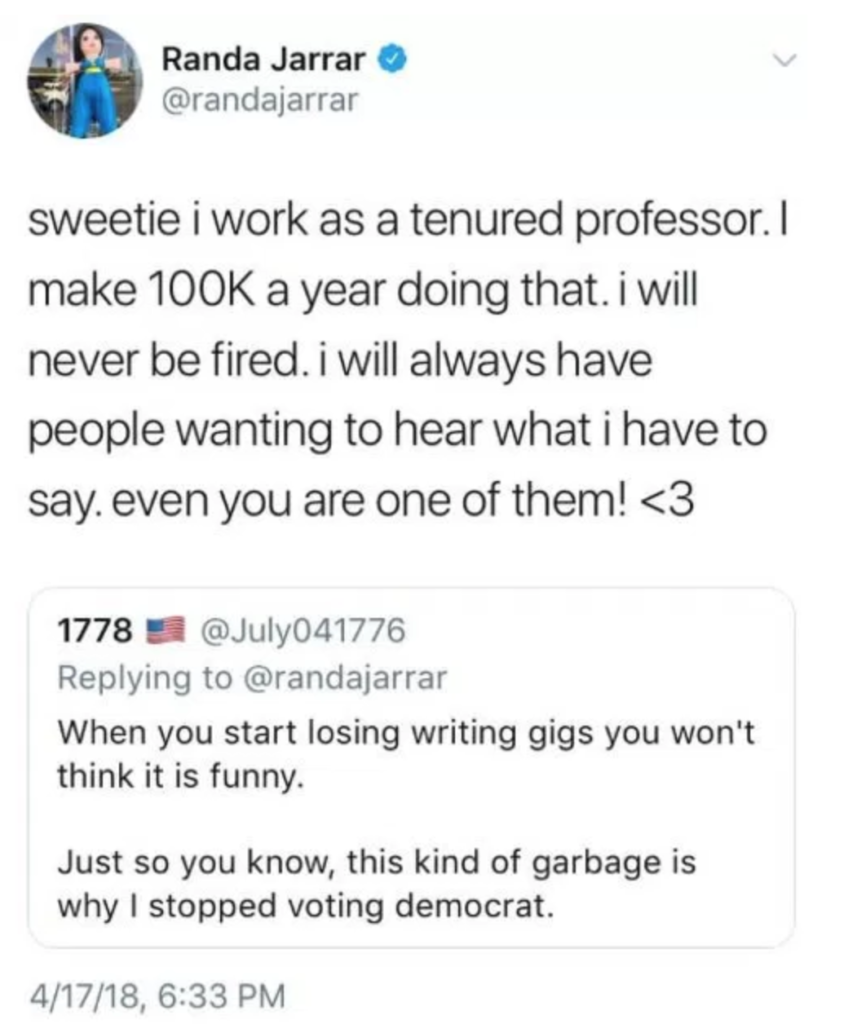 Perhaps the university is worried about a lawsuit from CAIR or other Muslim legal defense organization?

Must be sad being such a shriveled, bitter soul. https://t.co/2egiwyEMrX

Barbara Bush is loved and lived to be 92. This is what jealously of realizing those things won't burden you looks like. #Caring pic.twitter.com/LBxQTXQ0Yf

Should Professor Randa Jarrar be fired for her heartless comments about the death of former First Lady Barbara Bush? Please leave us a comment (below) and tell us what you think.