The numbers have finally been tallied from yesterday’s gruesome school shooting at Marjory Stoneman Douglas High School. The total isn’t good: 17 people lost their lives at the hands of Nikolas Cruz. Now we face the uncomfortable task of asking “why?” Why did this happen? Why did Cruz go on a military-like shooting rampage through his former school? What clues were there that should have alerted the authorities?

After all, Cruz is just 19 years old. At first glance, he doesn’t appear to be the kind of person who snaps and goes on a shooting spree:

It’s been reported that Cruz was a loner at high school, that he didn’t have many friends, and that his mother’s death last year may have sparked a downward spiral in emotional health. President Trump tweeted this morning about Cruz’s previous and alarming behavior:

So many signs that the Florida shooter was mentally disturbed, even expelled from school for bad and erratic behavior. Neighbors and classmates knew he was a big problem. Must always report such instances to authorities, again and again! 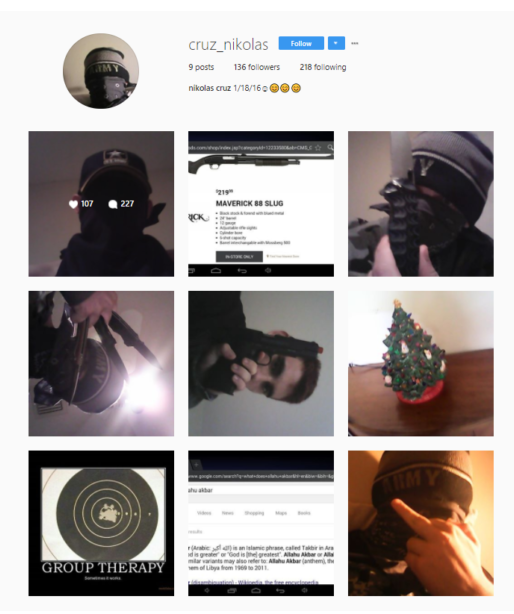 Many are pointing out that Cruz’s clothes suggest an ISIS influence. But on his own postings, he joked about killing Islamists, so it’s unclear if that’s a tangible connection to make.

Likewise, it’s being widely reported that Cruz is a Trump supporter because his Instagram profile featured him wearing a MAGA hat.

This is also a flawed assumption. It’s clear from what we know now that Cruz was a highly disturbed individual. No politics motivated his desire to kill over a dozen of his former classmates.

FBI agents were warned about Nikolas Cruz’s plans to become a “professional school shooter” months ago, according to a YouTube vlogger who noticed a sick comment on one of his videos. https://t.co/VPzQ3o4ibw pic.twitter.com/uMsSKpkpH0

This is a sick, sad situation. The victims and families should be given our prayers at this time, even if liberals find such a practice worthless.