“No one is above the law,” tweeted New York Attorney General Eric Schneiderman last year, “and I’ll continue to remind President Trump and his administration of that fact every day.”

He won’t be reminding President Trump for much longer. Last night Schneiderman, who has been treated by the Left as something of a “women’s rights champion,” was accused of abuse by four women.

Each of the women is one that Schneiderman has had romantic encounters with, and they alleged that “he repeatedly hit them, often after drinking, frequently in bed and never with their consent.

Schneiderman tried to play off the allegations as stemming from his own adventurousness in the bedroom, claiming in a statement that “In the privacy of intimate relationships, I have engaged in role-playing and other consensual sexual activity. I have not assaulted anyone. I have never engaged in nonconsensual sex, which is a line I would not cross.”

He resigned not long after the statement, so clearly, even he didn’t buy his own excuse (or at least knew the public wouldn’t).

Ironically, only one man saw this coming, and it was the one Schneiderman has become a hero on the left for attacking: Donald Trump.

Trump compared Schneiderman to Anthony Weiner and Eliot Spitzer in a 2013 tweet, both of which were New York Democrats with national political ambitions brought down by sex charges (sexting with a minor and paying for prostitution). “Weiner is gone, Spitzer is gone – next will be lightweight A.G. Eric Schneiderman. Is he a crook? Wait and see, worse than Spitzer or Weiner,” Trump tweeted.

Weiner is gone, Spitzer is gone – next will be lightweight A.G. Eric Schneiderman. Is he a crook? Wait and see, worse than Spitzer or Weiner

As hilarious and prophetic as that tweet is, one of the replies is even better. 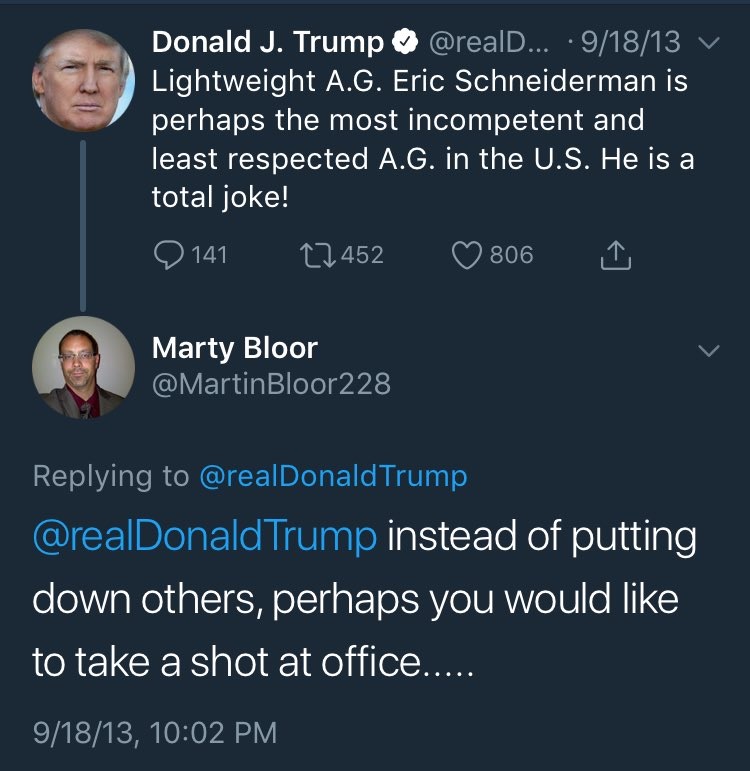 Was the advice taken? Apparently.

Last year, Politico asked regarding Schneiderman “Will This Man Take Down Donald Trump? in the headline of an article profiling him. Just last November “comedian” Samantha Bee made the man into a comic book hero on her show, as the man who can “save us from Trump.” I don’t think he’ll be doing that anytime soon.

What do you think inspired that Trump tweet back in 2013? Be sure to let us know in the comments section below!

Senator John McCain Will Not Be Returning to the U.S. Senate, Prepares for the End