This is how it originally appeared: 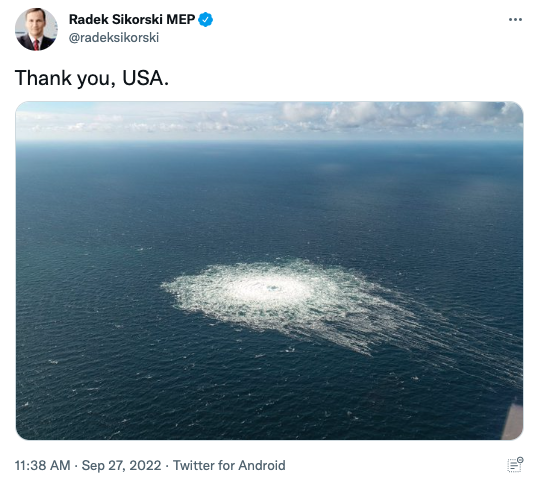 As if international tensions haven’t been high enough, rumors have been swirling surrounding who was behind the apparent sabotage of the natural gas pipeline Nord Stream 2. The pipeline’s significance for Russia and Europe is enough for this to be the backdrop of a future international intrigue novel, but for now is devastatingly real.

Many in the West argue that the apparent culprit in this underwater energy attack is the Russians. Still, others speculate that the saboteur could be the one and the only United States of America.

One particular proponent of the latter possibility had Twitter ablaze, given the individual’s previous and current ties to the Polish and American governments.

So grab a cup of coffee and cozy up under a blanket as no doubt your energy bills have you holding out on turning on the heat, and get ready to dive into this real-time international thriller.

Does it still count as a conspiracy theory when they're just coming right out and saying it? pic.twitter.com/LB3cwVuVv7

RELATED: After U.S. Soldiers Were Told to Go On Food Stamps, Congress Finds Another $12 Billion for Ukraine

As a refresher, Nord Stream 1 and 2 are the pipelines that run from Russia to Germany to carry natural gas into the heart of Europe.

Already, the war in Ukraine has caused an energy crisis in Europe, with skyrocketing costs. So when major leaks appeared from Nord Stream 2, eyebrows began to raise almost as quickly as European electricity bills.

What puts these leaks over the top for breaking news is the universal agreement that the leaks were no accident. Sweden’s National Seismology Center recorded significant seismic events near the leaks before their discovery.

“There is no doubt that these were explosions.”

Mr. Lund is a scientist, and I’ve been told that we should trust science. So who is responsible for the explosions?

A Thank You Note

Radek Sikorski believes the U.S. sabotaged the pipeline. And for this, Sikorski is thankful.

In a tweet read around the world, Mr. Sikorski simply said, “Thank you, USA.”

Mr. Sikorski is no random Polish guy. He was Poland’s Defense Minister from 2005 to 2007 and then Foreign Minister until 2014.

You might say it’s not a big deal because he’s no longer in those positions.

He’s still very active as an elected member of the European Parliament. Among other roles granted to him, he’s a senior fellow at Harvard’s Center of European Studies.

Not everyone agrees with Mr. Sikorski. Poland’s Secretary of State Stanislaw Zaryn denounced his claim on Twitter.

Russian #propaganda instantly launched a smear campaign against Poland, the US and Ukraine, accusing the West of aggression against #NS1 and #NS2.

Authenticating the Russian lies at this particular moment jeopardizes the security of Poland.
What an act of gross irresponsibility! pic.twitter.com/S9YJKRCv9B

RELATED: Report: White House Has ‘Deep Mistrust’ of Ukraine President Volodymyr Zelenskyy, Even As They Continue to Send Aid

Russia, however, denies claims that they would sabotage their own pipeline. In addition to calling the claim stupid, Kremlin spokesman Dmitry Peskov explains that it would be economically disadvantageous for Russia to blow up its pipeline, stating:

“…we have lost a route for gas supplies to Europe.”

Mr. Peskov doesn’t stop there; he goes on to tease that it could be the U.S. who sprung the leaks, stating:

“We see the huge profits of the U.S. suppliers of liquefied natural gas…”

Is this just more Russian propaganda? Possibly and probably. However, it is interesting to note that just a few weeks ago, Russian President Vladimir Putin told European leaders:

“The bottom line is if you have an urge, if it’s so hard for you, just lift the sanctions on Nord Stream 2, which is 55 billion cubic meters of gas per year, just push the button and everything will get going.”

It seems strange to advocate for turning on the pipeline you plan to sabotage.

RELATED: Here’s All The Weapons Biden Sent to Ukraine, And What It Means For U.S. Security

Before Mr. Putin invaded Ukraine, President Joe Biden had warned that measures would be taken against Nord Stream 2. He said quite literally:

“If Russia invades then there will be no longer a Nord Stream 2. We will bring an end to it.”

When asked by a pesky reporter just how he planned to do that, given that Germany is in control of the Nord Stream 2 project, President Biden coolly said:

“I promise you, we will be able to do that.”

Perhaps he made good on that promise? Or is it too much to assume our military and intelligence community could pull off a stunt like that?

According to German magazine Der Spiegel, the CIA had warned Germany weeks ago of a possible attack on the two gas lines. So was it a warning based on intel intercepted from Russia? Or a heads up on a pending operation? I mean, the drama is enough to want to pop some popcorn.

Who Else Stands To Profit?

Let’s not forget who else could benefit from this deep sea subterfuge. There have been a lot of concerns both in the West and from within Ukraine that support for their effort to retake their land will drag into the winter months.

BREAKING: President Trump has offered to step in and mediate a peace deal between Russia, Ukraine and the US pic.twitter.com/TNfdChcoam

“Neutral countries will not be able to sit back: they need to take a stand.”

I’m not saying Ukraine sabotaged the pipeline – mainly because they don’t have the capacity to do so. Still, an attack on the pipeline may entice some European countries to get more involved in the fight.

“All available information indicates those leaks are the result of a deliberate act. Any deliberate disruption of European energy infrastructure is utterly unacceptable and will be met with a robust and united response.”

What will that robust and united response entail? Who knows.

Will we ever know definitively if and who sabotaged the pipeline? Doubtful.

It is clear that we are amid an energy and, dare I say it, cold war that appears to be inching closer to a hot war one drip at a time.

…the writers, editors and publishers of The Political Insider have the maturity of an 8 year old, the intellect of a two year old…and the morals of a corrupt, Globalist organization. They publish tripe…such as “Russia bombed their own pipeline”, and they find the thinnest of logical threads to bombast about their biased, corrupt idiot perceptions. The PI is nothing more than a Deep State Front, designed and financed to throw off the really dumb Americans and others who haven’t the ability to think critically. If the idiots running PI had the ability to feel embarrassed or ashamed, they would. But they don’t. Psychopaths have no emotion or honest perception about their illicit behaviors.

I can see the Obidoma Administration doing this, Biden has blamed Russia for the High Fuel costs in America, something he himself created, He’s threatened to use the military against American citizens ,that dislike his policies and Agenda. People need to get it through their heads, Biden is Dangerous, not only to the US but the world, he’s been trying to start a Major war with Russia since this started, can you think of a better way to do it, then blame Russia for attacking us, in retaliation?!

VICTORIA NULAND EVEN SAID SO. THEY ARE ITCHING TO BRING THIS TO ANOTHER WORLD WAR! THEY WANT TO ANNIHILATE HUMANITY!
THANK YOU, EVIL BIDEN/OBAMA CRIMINALS, SERVING THE GLOBALIST ELITES!