Among companies targeted by liberal activists in the wake of the Stoneman Douglas Valentine’s Day massacre has been Dick’s Sporting Goods, a store that also sells goods for more “outdoorsy” activities, including hunting.

The Left has targeted companies with any kind of partnership/sponsorship with the NRA, but Dick’s is a more direct target, given that they sell firearms as well. While those companies caving to the Left’s demands have seen a decline in their consumer favorability, Dick’s jumped ship and did the same.

“Based on what’s happened and looking at those kids and those parents, it moved us all unimaginably,” company Chairman and CEO Edward Stack said earlier this morning on Good Morning America. “To think about the loss and the grief that those kids and those parents had, we said, ‘We need to do something.'” Regarding so-called “assault weapons,” Stack (the son of the company’s founder) explained, “we’re taking these guns out of all of our stores permanently.”

The Washington Free Beacon’s Stephen Gutowski couldn’t help but do some sleuthing, and notice that the kind of guns Dick’s was removing from their stores had already been removed years ago.

Dick's is getting lots of publicity for this but they haven't sold these kind of guns in their main stores for over 6 years. https://t.co/rT7F8Mq34L

They had been selling them in a smaller chain they owned but not in the main stores. This is not as significant a move as they want people to believe.

Dicks stopped selling AR's five years ago. Their principles somehow allowed them to continue selling them in their Field & Stream-branded stores until now.

Though there’s a question that arises in all this: when’s the last time you saw someone buy a firearm at Dick’s Sporting Goods anyway?

Okay. So the shooter in Parkland bought his gun from Dick’s. Now I have heard of one person buying a gun from Dick’s and given that he’s the only one anyone has ever heard of, it is probably reason enough for them to stop selling.

The chain implemented some other changes too, including raising the age to purchase a firearm to 21, ceasing the sale of high-capacity magazines, and refusing to sell “bump stocks.” 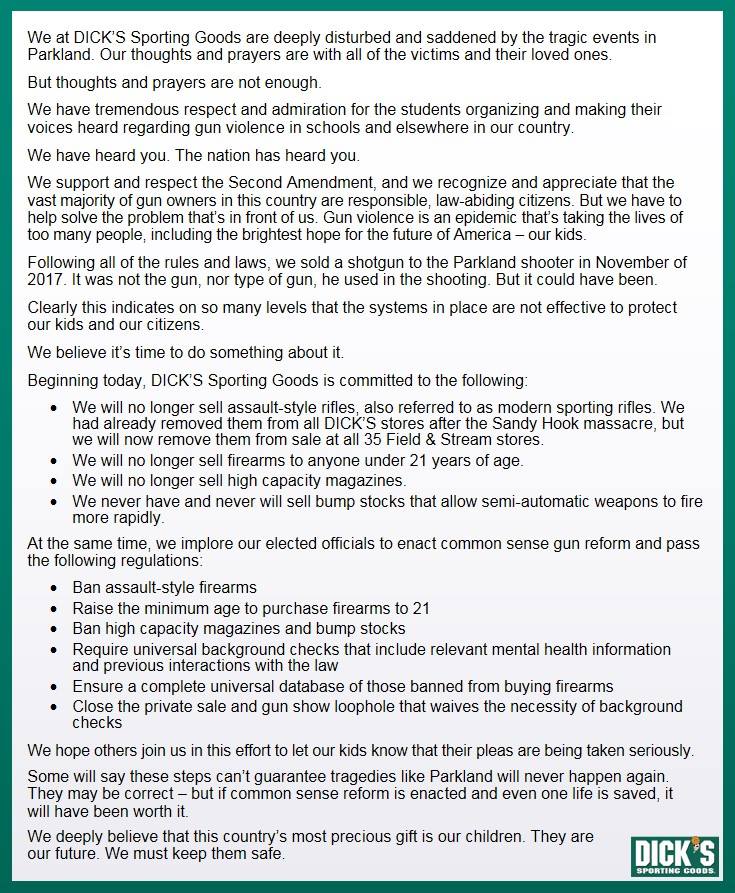 This probably won’t impact Dick’s all too much – because few purchased firearms from the store in the first place. The bulk of their business is in selling to athletes, not hunters.

Still, even they must be well aware that mechanically speaking, the “assault” rifles they’re refusing to sell operate identically to the regular rifles they’ll continue selling.

Be sure to share this story with others now to show them the truth.

Public Opinion Declines For Companies That Cut Ties With the NRA

What a stupid ploy to gain peer notoriety. Grow some balls Dick.

Great marketing move. We are going to stop doing what we already stopped doing. Like passing a new law to outlaw murder.

Stop harassing our merchant stores, you are playing right into the democrats hands.
guns do not shoot by themselves, people pull the trigger.
Demented politicians assign gun free zones, how stupid can we be to let them.
I hear even military bases are unarmed.

Roger,
Yes on unarmed military bases — as in Fort Hood. Remember that one?

They pulled this same act a few years back. As then, I will NEVER purchase anything from them again. I will also due diligence and find if I am dealing with any company they own! The place to hurt these scum is in their wallet. If you believe in 2A, let Dick’s Sporting Goods rot!