CNN Issues Major Warning for Democrats Ahead of Midterms

Michael Toner, who served as chairman of the Federal Election Commission, said that he expects this midterm season to be the most expensive in U.S. history, and he’s probably right. Spending topped $3.8 billion in the 2014 midterms, up from $3.6 billion in 2010, and spending thus far for the 2018 midterms is already ahead of where it was during those two prior election cycles.

Through late May, House and Senate candidates have spent just over $745 million. By comparison, during the last midterm cycle, through May 28, 2014, they’d spent approximately $578 million. 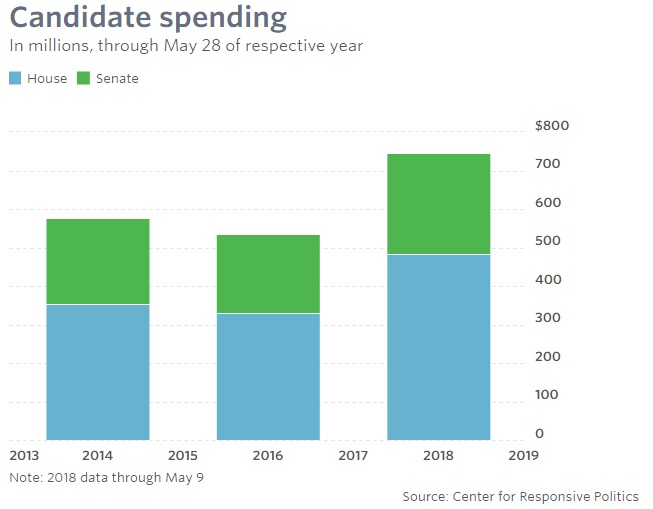 The Republican National Committee, in particular, has continued to smash fundraising records following the election of Donald Trump. The RNC raised $157.7 million so far this year and has $42.4 million in cash on hand. By contrast, the DNC has raised just $79 million in total over the same period, and just $10.1 million in cash on hand. The RNC also has no debt on their balance sheet, while the DNC has $6.1 million.

And all that extra money the RNC has over the DNC is on top of the fact that Democrats are losing their edge in the polls.

The generic congressional ballot has continued to tighten, according to a new CNN poll, with the Democrats’ edge over Republicans within the poll’s margin of sampling error for the first time this cycle.

About six months out from Election Day, 47% of registered voters say they back the Democratic candidate in their district, 44% back the Republican. Voters also are divided almost evenly over whether the country would be better off with the Democrats in control of Congress (31%) or with the GOP in charge (30%). A sizable 34% — including nearly half of independent voters (48%) — say it doesn’t matter which party controls Congress.

Much of the performance of Republicans in the midterms will be dependent on the popularity of Donald Trump – and that is trending upward. Despite over 90 percent of the mainstream media’s coverage of the Trump administration being negative, Rasmussen’s daily Presidential tracking poll puts Trump’s approval at 48 percent today, higher than Obama at the same point during his Presidency.

Do you think Republicans will hold the House and Senate? Let us know in the comments section below!

Pence On Mueller Investigation: ‘It’s Time To Wrap It Up’ [VIDEO]