The legendary Hollywood actor took hypocritical shots galore at the President during a charity event in Los Angeles earlier this week.

De Niro blasted Trump for being “rich” and “spoiled,” then even blasted him for having never served in Vietnam.

The “Raging Bull” star is, of course, rich, spoiled and never served in Vietnam.

President Trump “lacks any sense of humanity or compassion,” De Niro alleged, adding, “of course, he did have to overcome the curse of growing up rich and spoiled … and endure the heartbreak of bone spurs. Maybe that had an effect.”

Why is a spoiled rich guy criticizing another rich guy for being rich?

As of September of 2017, De Niro’s net worth was estimated to be at roughly $200 million according to Celebrity Net Worth.

And the ‘bone spurs’ comment … if any of our readers locate evidence that De Niro served in Vietnam, or any branch of the military for that matter, please let us know.

But this ‘Focker’ wasn’t through yet. The “Meet the Parents” star also went with a juvenile playground insult.

“A college education is important, but education without humanity is ignorance,” De Niro relayed. “Look at our president. He made it through the University of Pennsylvania, so he was exposed to a quality education, but he’s still an idiot.”

“As long as our country’s leadership is so appalling and so corrupt, I’ll be speaking out at every venue,” De Niro continued. “To be silent in the face of such villainy is to be complicit.”

So dramatic – remember, he’s an actor after all.

Oh, that’s right … you were campaigning in support of a man who was impeached for perjury and obstruction of justice. 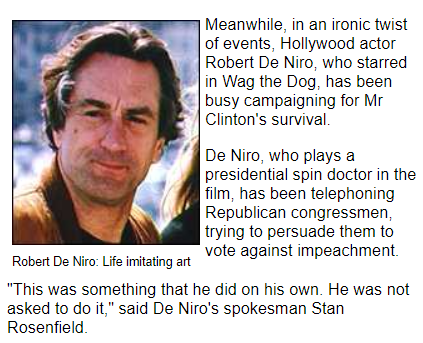 Now that, my friends, is a rich, spoiled, war-dodging idiot, who turns a blind eye to corruption if there ever was one.

Tell us your thoughts on Robert De Niro’s comments below!

There are certain home truths we fail to absorb completely. You may be talented at a craft, even a quite creative one, and still be dumb as a stump. You may become rich, without being particularly bright. You may become famous, without having any redeeming qualities whatsoever. You may be educated without being learned or wise. And you may comment on a subject matter without knowing a single [email protected] thing about it.