Most people didn’t know what a “bump stock” was before the massacre in Las Vegas last year, where a gunman opened fire on a crowd of concertgoers at the Route 91 Harvest music festival.

It was revealed that the shooter had used bump stocks to make his semi-automatic weapons fire at a rate more resembling automatic fire. Automatic weapons have been banned in America since 1934, and many have called for a ban on bump stocks as a result. (RELATED: Denver Bans Bump Stocks and Suggests Residents ‘Surrender’ Them – No One Listened).

There was some discussion of doing so at a federal level, but like every other potential gun control measure, it ended up going nowhere. Instead, a few States have decided to ban them on their own. New Jersey and Massachusetts are among them, banning bump stock purchases, and requiring all outstanding bump stocks to be turned in. The gun accessory isn’t all too common, and there are only 8,500 bump stocks in Massachusetts, and 5,600 in New Jersey.

The problem for regulators is that there isn’t a record of who owns them, so they’ve had to rely on citizens voluntarily turning in their bump stocks to comply with the law. Massachusetts and New Jersey are both heavily liberals States, and yet virtually nobody turned in their bump stocks. Only three people did in Massachusetts, while a total of zero did in New Jersey. 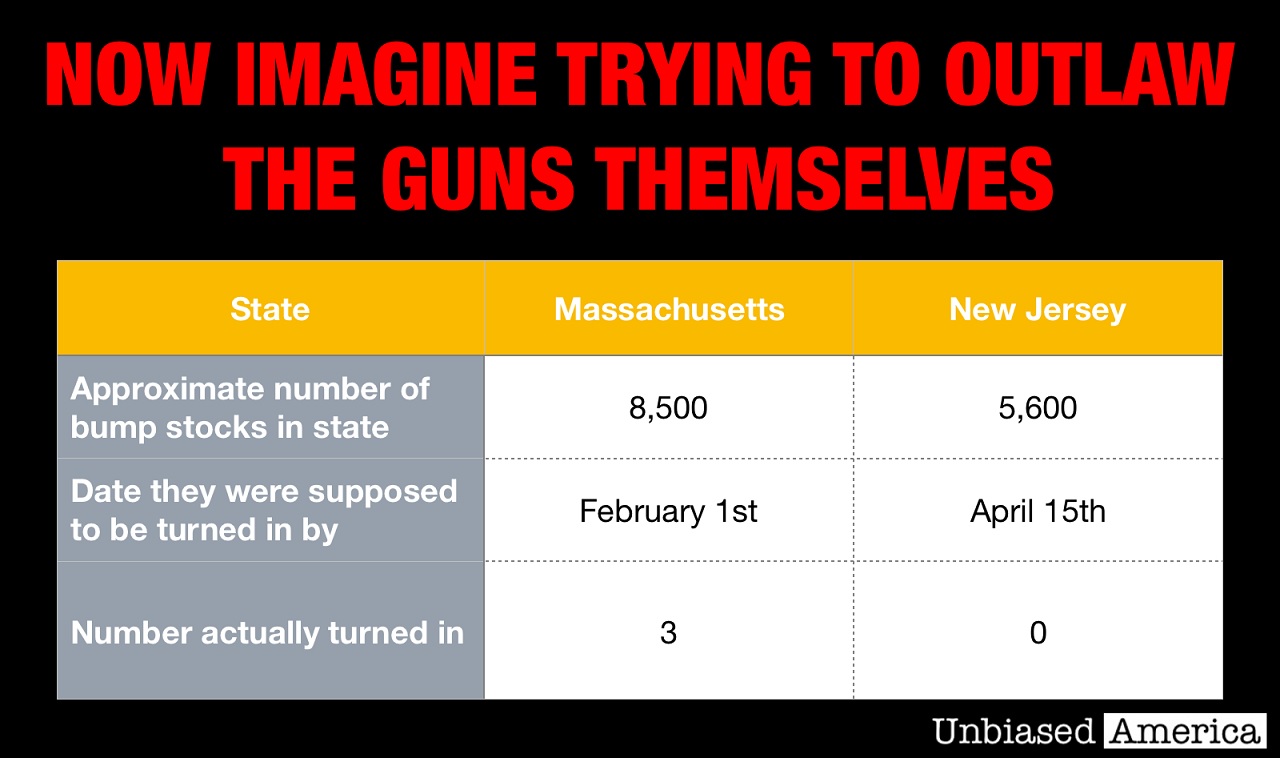 Bump stock bans are currently awaiting governor’s signatures in Hawaii and Connecticut, and Delaware and Rhode Island are set to ban them soon too. A gun control proponent may argue that despite the impossibility of confiscating all the current bump stocks in circulation, a ban on sales prevents the supply from growing.

Regardless, the real lesson here is that any gun confiscation schemes the Left may cook up would never be obeyed if attempted. If gun owners in far-left States won’t even turn in a gun accessory, what could of gun control measure would owners comply with?

Do you support a ban on bump stocks, or is this a waste of time? Share your thoughts with us below!