Police officers and their web team in Berkeley, California publicly released headshots and names of individuals arrested during a protest over the weekend. But Antifa and their supporters are not happy.

The Berkeley PD has it as their standard practice to publish this information, and repost on their Twitter account, which includes the arrested individuals’ names, the city of residence, age, and what charges they faced at the time of arrest.

Here are some recent examples. Many are surprisingly young and are facing weapons charges:

We are confiscating weapons and making arrests. pic.twitter.com/YisxhW4FM0 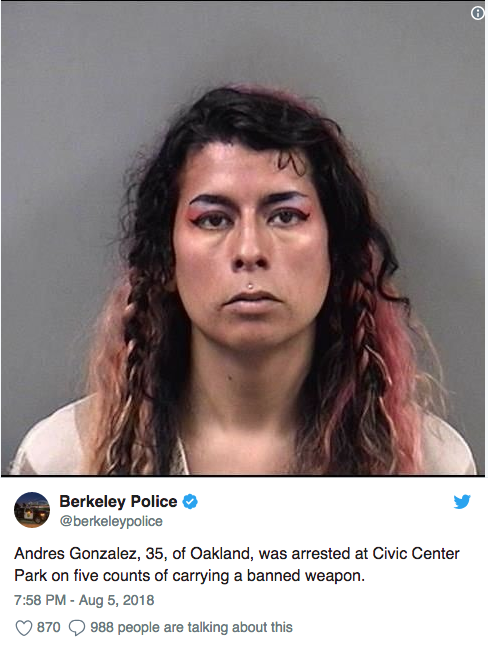 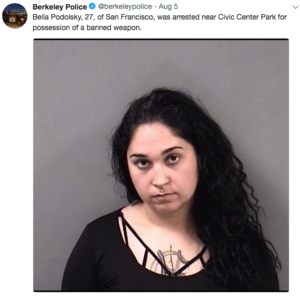 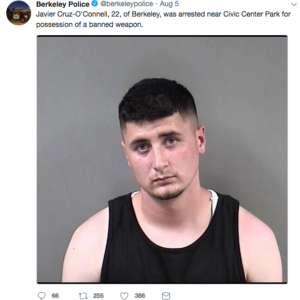 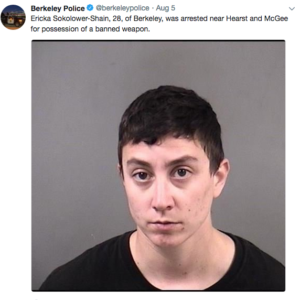 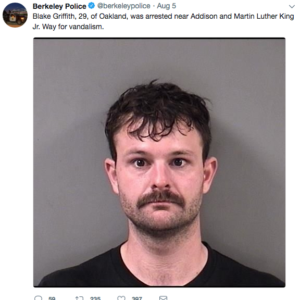 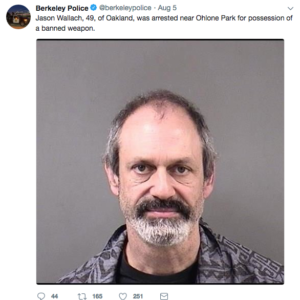 As Huffington Post contributor Jesse Benn responded to these tweets, “Hey [Twitter Support], I thought doxing [sic] wasn’t allowed or is it just fine when a ghostskin [sic] does it from an official police account?”

hey @TwitterSupport I thought doxing wasn’t allowed or is it just fine when a ghostskin does it from an official police account?

and do you think the Berkeley pigs will tweet about that as well dickhead?

Berkeley Mayor Jesse Arreguin, a Democrat, has denied responsibility for releasing the mugshots and said he plans on speaking to the police officers about possibly stopping this practice in the future.

But the Berkeley PD is not backing down! As their police spokesman Byron White told The Guardian, “People are coming from out of town and bringing weapons and are committed to violence. We don’t want people to be able to do that with anonymity.”

The Antifa attack over the weekend in Berkeley was severe, as protesters filled the central streets. The city was under an emergency ordinance, and prohibited protestors from bringing weapons, signs mounted on sticks or other dangerous weapons. But police were still able to confiscate dozens of fireworks, sledgehammers, wooden poles, along with pepper spray and mace.

These criminals who took part in this senseless violence shouldn’t be allowed to do so anonymously:

Berkeley Antifa tried to smash the windows out at the Marine Corps building, but the 119 lb men were unable to improvise, adapt, and overcome. pic.twitter.com/aowBnI0bdq

If you want to thank the Berkeley Police Department for a job well done, please tweet at them on Twitter.

Facebook has greatly reduced the distribution of our stories in our readers’ newsfeeds and is instead promoting mainstream media sources. When you share on social media, however, you greatly help distribute our content. Please take a moment and consider sharing this article with your friends and family. Thank you.