Alabama Senate Election Results- The Polls Have Closed and the Numbers are In- OFFICIAL!

The New York Times is reporting that Doug Jones is leading in the Alabama Senate race, with all the votes in. The race is over! 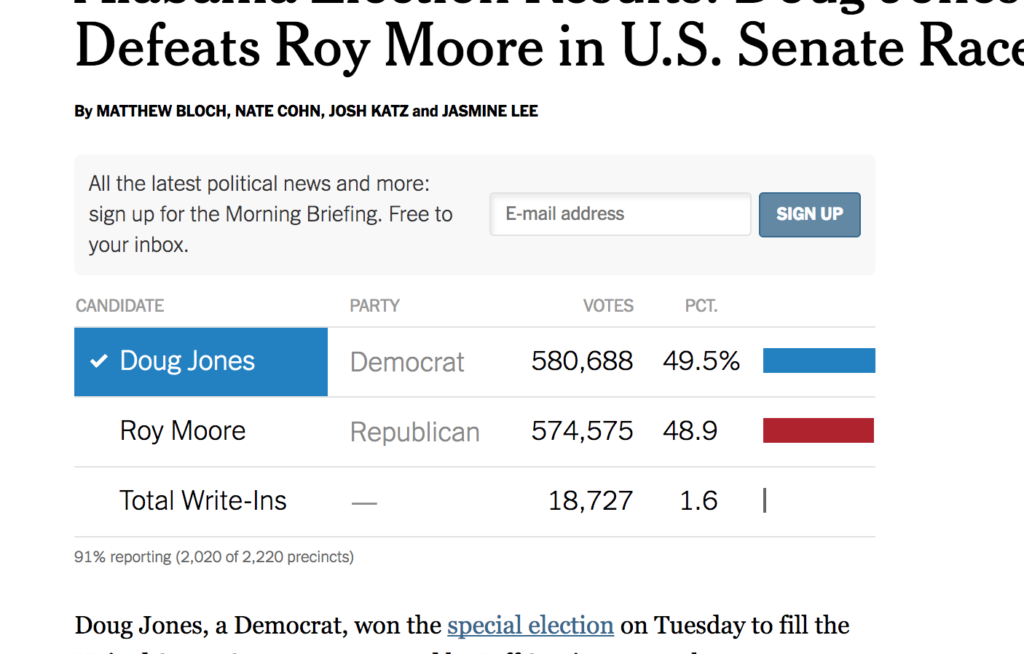 9:45 p.m. Write-in candidates make up barely 1 percent
Write-in candidates are not much of a factor so far in the race — although they could be, if it’s incredibly close. So far, there are only 1,389 write-in votes, or 1.23 percent of the vote so far.

9:22 p.m. Returns show Moore with slight advantage so far
Moore is slightly ahead of Jones so far, although only a handful of counties have reported, according to the Alabama Secretary of State. Moore leads Jones 54.1 percent to 44.3 percent.

8:48 p.m. New exit polls reveal race, gender gap
There is a gender gap in the election. More than half of men are voting for Moore (57 percent), while more than half of women voted for Jones (57 percent). Much of that support for Jones however is from African-American women. White women are still backing Moore with about two-thirds of their votes.

More voters have a favorable view of Jones (50 percent) than Moore (41 percent).

Of the last-minute deciders — the 10 percent of voters who decided in the last few days — they threw their support behind Moore (56 percent) to Jones (37 percent).

8:16 p.m. Does Doug Jones have the numbers?
CBS News Political Director Steve Chaggaris talks about whether Jones, at this point, has the votes to overcome Moore’s supporters.

We will update this post as the final results become available. It’s going to be razor-close!

Razor thin margin (.6%) being as 90% blacks supported supported Jones, look for him to be introducing bills favoring reparations, free college tuition and other “free to blacks” programs.