President Trump just did something many people had hoped Barack Obama would have done. He issued a full pardon to Jack Johnson, the first black heavyweight boxing champion.

Johnson had been charged and convicted of violating the Mann Act in 1913, accused of transporting a white woman – his girlfriend who would later become his wife – across state lines “for immoral purposes.”

He was convicted by an all-white jury in less than two hours and imprisoned for nearly a year, destroying his legendary boxing career.

“He served 10 months for what many view as a racially motivated injustice,” the President said, adding that “he was treated very rough, very tough.”

So @RealDonaldTrump just posthumously pardoned The first Black heavyweight champion Jack Johnson. This should have happened long ago. Many wished @BarackObama had done this.

Stallone had presented Johnson’s story to Trump for consideration.

Sylvester Stallone called me with the story of heavyweight boxing champion Jack Johnson. His trials and tribulations were great, his life complex and controversial. Others have looked at this over the years, most thought it would be done, but yes, I am considering a Full Pardon!

Stallone praised Trump for his decision, posting an Instagram image of their meeting in the Oval Office.

“Thank you one and all!” he wrote. “Justice has been done!” 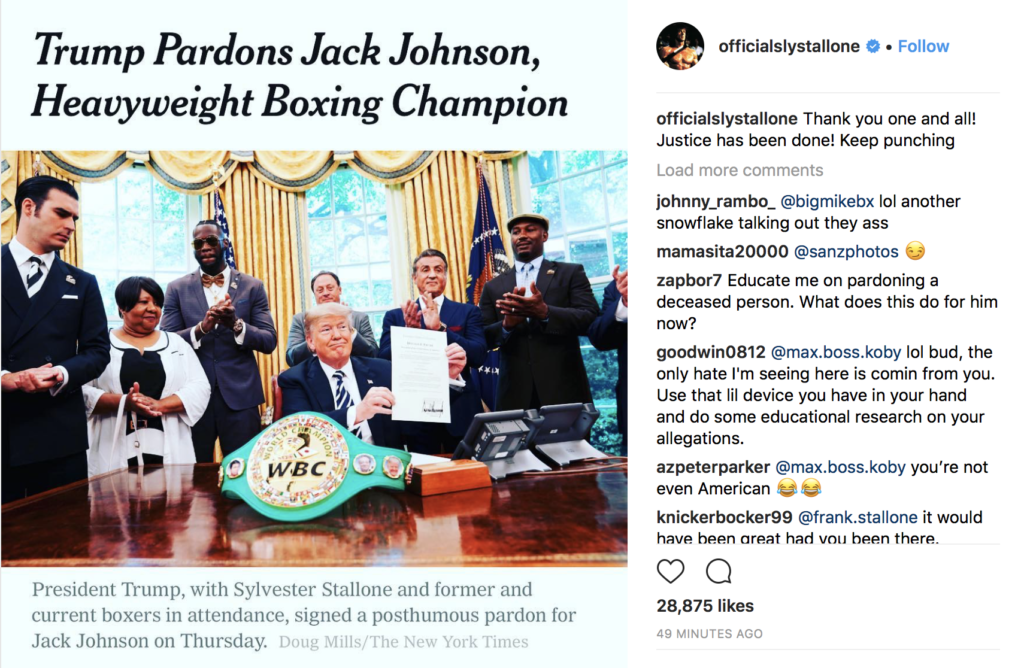 President Trump signaled that it was the right time to finally correct an injustice.

The President took a subtle shot at his predecessor for not pardoning Johnson, something many bipartisan officials requested on numerous occasions.

A resolution had been presented in 2015, but as Trump explained, “they couldn’t get the president to sign it.”

Even Senator John McCain admitted pardoning Johnson would be a good thing.

“I hope President Trump will seize the opportunity before him to right this historical wrong and restore a great athlete’s legacy,” he said in March of 2017 after another bipartisan resolution had been introduced.

He did just that. Let’s see how long it takes for those opposed to Trump to turn this around and make it a negative story. (RELATED: Heavyweight Champion George Foreman Grilled On His Support Of Trump).

Should Trump have pardoned Jack Johnson? Tell us what you think below!

Union Firefighter in Los Angeles Earned $300,000 in Overtime By ‘Working’ More Hours In a Year