Pearl Jam stopped being edgy about 20 years ago, and now they’ve completely jumped the shark of originality by calling for the death of President Donald Trump.

To promote a fundraising concert for Sen. Jon Tester (D-Mont.) at the University of Montana, Eddie Vedder’s group of virtual has-beens commissioned a poster featuring a bald eagle picking at the skeletal remains of Trump in front of a burning White House, along with a bevy of other cliche imagery:

Also depicted in the image are Jon Tester and his Republican opponent, “Maryland Matt” Rosendale, who has a lobster claw for a hand and waves a Maryland flag. Tester is portrayed heroically leaping over the nightmarish scene in a tractor, Evel Knievel-style. A scruffy hillbilly in the bottom left corner holds what appears to be a U.S. Constitution with a “2nd” visible, referencing the Second Amendment. The macabre image is framed by the giant initials of the band: “P” and “J.”

The poster, which Rosendale called “reprehensible,” was a collaboration between Pearl Jam bassist Jeff Ament and artist Bobby Draws Skullz. Ament is a longtime friend and supporter of Tester’s, and Pearl Jam has been frequently associated with Tester’s campaigns. Unsurprisingly, Tester has not responded to requests for comment about the poster. 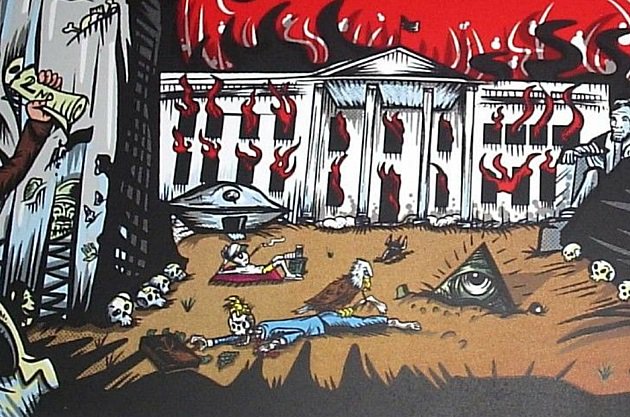 Again: it’s become unfortunately cliche for celebrities to call for the death of Trump. However, the Pearl Jam poster could complicate Tester’s already shaky re-election bid. Trump carried Montana by a whopping 20 points in 2016, and Tester previously drew the ire of the president when he claimed that Rear Adm. Ronny Jackson, Trump’s nominee for VA secretary at the time, had a habit of handing out prescriptions “like candy” to soldiers.

Indeed, Trump still has a positive approval rating in Big Sky Country. If Tester doesn’t want to test his constituents, he might do well to apologize for the poster.