President Trump Is Taking Obama’s Legacy Out With the Trash

With the pronouncement that President Trump is pulling the United States out of the Iran nuclear agreement, many have been left wondering what exactly is left of the legacy of Barack Obama.

To paraphrase a Celine Dion song, we “got nothin’ left.”

For many, the Iran deal signifies former President Obama’s signature achievement during his two terms in office. Sure, ObamaCare ranks right up there, but then, that too has been torn apart with the repeal of the individual mandate.

Obama himself decried the decision to abandon the nuclear agreement calling it “misguided” and a “serious mistake,” neither of which is accurate and sounds more like the mutterings of a man whose legacy has been torn to pieces.

Maybe, just maybe, he should have considered going through Congress for his Iran deal. Or his executive orders on illegal immigration. It’s almost as if governing via a pen and phone is a bad idea.

So the remnants of the Obama administration are now in tatters thanks to President Trump. He is, in a sense, taking out the trash from those eight years in American history … 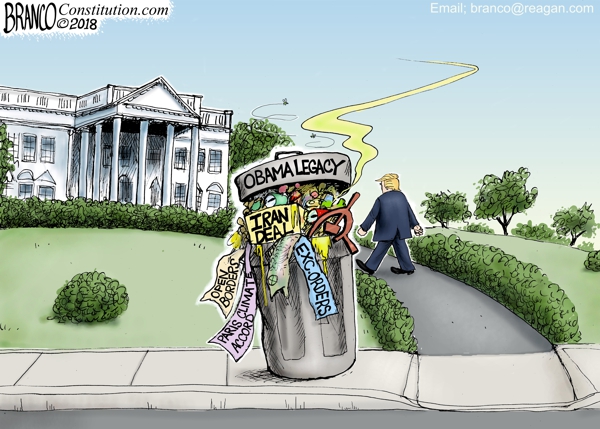 The Iran deal … in the trash can:

The Paris Climate Accord … in the trash can:

Open borders and illegal immigration … in the trash can:

It is, after all, exactly what Trump ran on. America had buyers remorse with President Obama. That’s why, as likable as he seemed as an individual, his policies led to historic losses for his party at every level of office between 2010 and 2016.

It’s why we now have a President Trump, who has been tasked with erasing his liberal predecessors every move.

Then again, it wasn’t much of a legacy, to begin with.

Matthew Continetti of the Washington Free Beacon writes, “The Iran deal was the signature achievement of Obama’s second term, and it is now gone.”

“In truth, though, Obama’s legacy was disappearing long before Trump made his announcement,” he added. “Obama’s legacy, like much of his self-presentation, was a mirage, a pleasing and attractive image that, upon closer inspection, loses coherence.”

It never really had coherence in the first place. That’s why it’s in a trash heap outside the White House lawn.

Has President Trump trashed Obama’s legacy? Tell us what you think below!