The National Football League (NFL) is a staunch supporter of free speech. If you were curious about this, just ask some of their top league executives and they’ll tell you all about it.

Green Bay Packers CEO Mark Murphy has commented during the ongoing National Anthem crisis, “We believe it is important to support any of our players who choose to peacefully express themselves with the hope of change for good.”

While Chicago Bears chairman George H. McCaskey would add, “What makes this the greatest country in the world are the liberties it was founded upon and the freedom to express oneself in a respectful and peaceful manner.”

Even NFL Commissioner Roger Goodell has claimed during the kneeling protests that have plagued his league that it is a mission to “advance the goals of justice and fairness in all corners of our society.”

Well, maybe not all corners of society as the following letter to the editor illustrates … 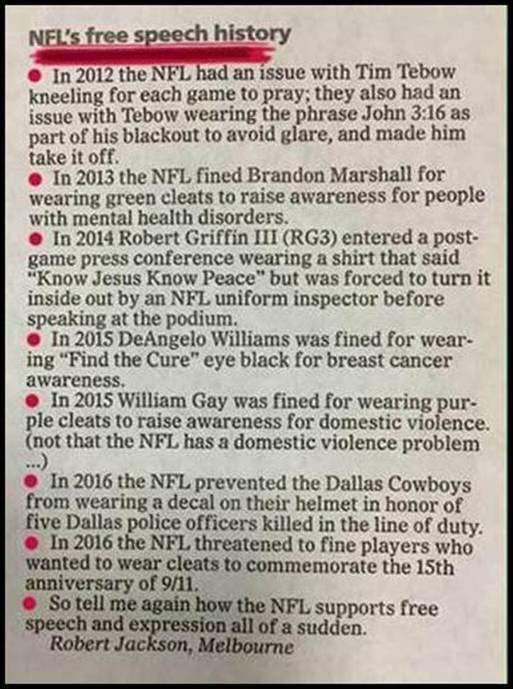 Where was the support for these players?

In his final collegiate game, Tebow chose Ephesians 2:8-10, which means that only through faith in God will you be saved.

The NCAA responded by banning the use of words on eye black, while the NFL maintained that policy – which they placed under the umbrella of a uniform policy – as Tebow entered the league. Perhaps had he simply said he was promoting ‘social justice’ causes rather than religious causes, they would have allowed the display.

Tebow was also frequently mocked and ridiculed by fellow players and certainly the media for his display known as “Tebowing,” in which the quarterback would take a knee … to thank God for his abilities.

Remember when people were complaining that Tim Tebow having John 3:16 on his eye black was a distraction for the #NFL?

The letter also rings true in that the NFL, normally sticklers for the uniform policy, has consistently battled players over trying to pay tribute to solemn events.

The league had to pull the reins back a bit on the 10-year anniversary of 9/11, when six-time Pro Bowl linebacker for the Chicago Bears, Lance Briggs, wore gloves and shoes to commemorate the tragic day.

Since then, however, the league has consistently fined players for honoring anybody through the use of custom cleats. With one notable exception – a “My Cause, My Cleats” campaign for one week in 2017, in which Tennessee Titans wide receiver Rishard Matthews wore cleats honoring Colin Kaepernick.

I dont have a foundation so i have chosen to support my brother @kaepernick7 foundation @yourrightscamp for #MyCauseMyCleats He has paid the ultimate sacrifice in order to bring true everyday issues to light. Please follow the page & go to the website to learn more. We Should ALL Know Our Rights & Be Able to Express Them Freely. Thanks again @solesbysir you continue to impress ✊🏾✊🏾✊🏾

And in 2016, what would have been a direct counter-argument to the supposed police brutality issue, the Dallas Cowboys were forbidden from wearing decals honoring fallen members from the Dallas Police Department.

The Cowboys had requested an opportunity to commemorate those who fell victim to the Dallas shooting in July of 2016, in which officers were specifically targeted.

Seems the NFL is only concerned about the free speech of those who wish to spit on the American flag and the National Anthem, not people and players from all walks of life.

Trump Slams Cuomo For America ‘Was Never That Great’ Comments