A student at the University of Utah created quite the viral stir recently when she posted a picture of a “cry closet” installed in the school’s library.

The closet, designed for students overwhelmed by the pressures of final exams, features a plush floor and lots of stuffed animals for cuddling by the fragile individuals amongst the student body.

A school communications specialist explained that it’s a nice little place for those too overwhelmed to act like adults.

“It’s a great place to just come and decompress, and that’s really what it’s for,” she said.

so my school installed a cry closet in the library LMFAOOOOOOOOO what is higher education pic.twitter.com/6rGcJv9qjr

Granted, the space inside is somewhat limited – liberals may have to fight for room amongst the stuffed dogs and cows – but we got to thinking, what happens if you have a bunch of snowflakes all in one confined space?

What would you call that?

We think we’ve figured it out … 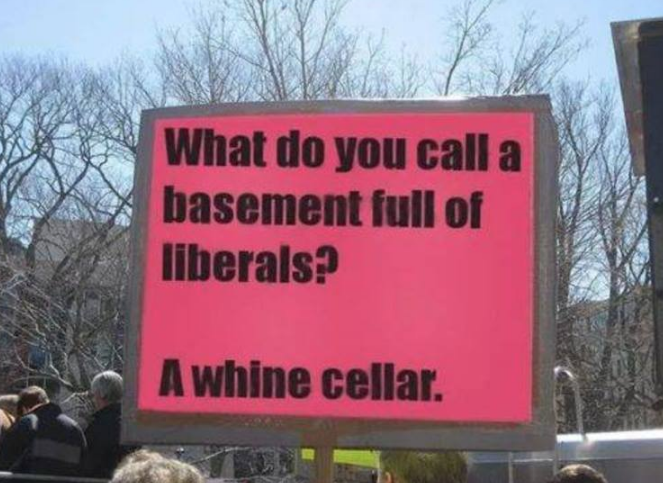 That’s right. A basement full of liberals is more properly known as a “whine cellar.”

Who could be some of the more prominent people in the ‘whine cellar?’

Miley Cyrus could certainly join, with this epic application for admittance:

Hillary “deserves to be the first female president,” Cyrus said, “and that’s what makes me so sad.”

According to Hillary’s own election biography “What Happened,” top aide Huma Abedin broke down in tears after learning that her husband Anthony Weiner’s sexting scandal had exposed her boss’s emails to further scrutiny at a crucial point during the 2016 election.

So, we can throw her in there too.

Speaking of Hillary, there is a whole slew of people from her election night “victory” headquarters that would qualify for the ‘whine cellar.’

Then, of course, there’s this view of Camp Hillary …

Heartbreaking. Mainly because we’re going to need a bigger basement.

Whenever these snowflakes gather together in the ‘whine cellar’ they can begin their meetings with the following daily ritual and recall that yes, Donald Trump is still their President:

If you loved this joke as much as we did make sure to share it with all your friends and family!