Hillary Clinton is across the pond promoting her book, “What Happened,” but she backed out from several media appearances last minute after reportedly “falling over and hurting her foot.”

According to the Daily Mail, Clinton fell following an appearance at the Southbank Centre in London Sunday night. On Monday, the two-time presidential failure failed to show at BBC “Woman’s Hour,” ITV’s “This Morning” show, and at the London Studios to record an interview with the BBC’s “Graham Norton Show.” Show hosts shared their disappointment on social media:

I’d read the book and everything. Apologies. #HillaryClinton @BBCWomansHour pic.twitter.com/Dh66CuYVph 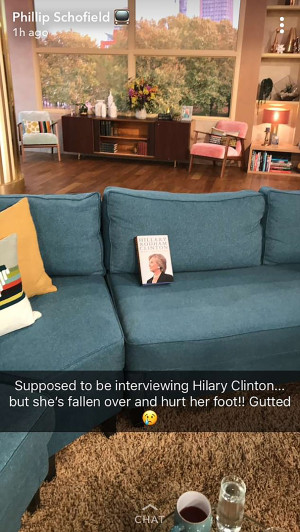 For what it’s worth, Clinton did eventually make her rounds – and it was revealed that she’d broken her toe.

Bit of a wait today @grahnort as @HillaryClinton had treatment for her broken toe. #ouch #HillaryClinton #TheGNShow pic.twitter.com/UC9ozKSWgX

Turns out Hillary Clinton has broken her toe. Tripped while running with a coffee while wearing high heels, she says.

But of course, Clinton had no trouble spinning her misfortune to push the liberal agenda. During her appearance on Graham Norton’s show, she praised Britain’s “excellent” socialized medicine system for taking care of her:  “I was running down the stairs in heels with a cup of coffee in hand, I was talking over my shoulder and my heel caught and I fell backwards. I tried to get up and it really hurt. I’ve broken my toe. I’ve received excellent care from your excellent health service.”

Please, spare us. Clinton received such quick care because she’s Hillary Clinton, not because Britain has superior health care.

This whole book tour is turning into a comedy of errors: first Clinton signed books in between milk and toilet paper at Costco, and now she’s broken her toe. Honestly, she’s lucky that’s all she broke; by her own admission, Clinton can’t handle more than one cellphone. So what on Earth was she doing running in heels down stairs while holding a coffee?

I guess her security detail wasn’t around to catch her this time.