Harry Reid Got His A** Kicked By an Exercise Band, but That’s Not The Worst Part

We’ve all seen the images of Harry Reid following an epic death match he apparently had with his personal exercise equipment.  Reid failed to operate an exercise band successfully and suffered multiple injuries.

Here is an image of the patent for the device used by Reid:

Now, of course, the resulting injuries are no laughing matter.  They were serious, and Reid very badly hurt himself.

Yet, that’s exactly what Reid is doing.

U.S. Sen. Harry Reid is suing a company that makes and markets a flexible exercise band that he says broke or slipped from his hand during an arm-strengthening routine on New Year’s Day, causing him to fall and suffer face, rib and eye injuries.

From there, it actually gets worse.  As Gawker reports, Reid is also suing the company for “loss of marital consortium” which is fancy terminology for being unable to have sex.

A closer read of the case shows that the Reids are claiming loss of marital consortium, a legal term defined as the “inability of one’s spouse to have normal marital relations, which is a euphemism for sexual intercourse.”

Excuse me for a moment …

Just for comparison purposes, here is an image of a senior citizen operating resistance band equipment without getting their a** kicked. 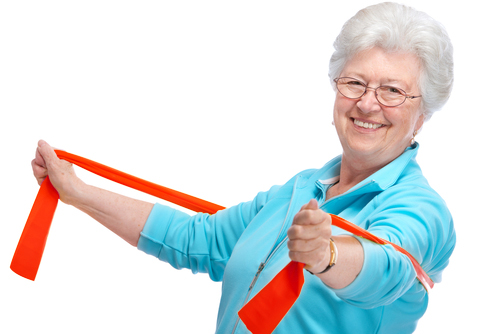 Comment:  What are your thoughts about Harry Reid suing the manufacturer of the exercise equipment?

Megyn Kelly Just Made a BIG Claim About Donald Trump

Kanye West Knows His Presidential Bid Will Hurt Biden, And He Doesn’t Care!