The firestorm over the National Anthem protests at NFL games may have died down, but it certainly hasn’t disappeared. A Colorado Gold Star family is boycotting the NFL because they believe the players are “disrespecting” the military and veterans by kneeling during the Star-Spangled Banner.

Glen Beine is a Denver Broncos fan and regularly attends games at Mile High Stadium. His stepson, U.S. Marine Cpl. David Sonka, was killed in combat in Afghanistan in 2013, and Beine says his family has never missed a playing of the pre-game National Anthem since. However, when 32 Broncos players kneeled during the anthem on Sept. 24, Beine left the stadium.

“And my feeling is, they’re disrespecting David and everybody else that has defended it [what the flag represents],” Beine said of his decision to leave, adding, “though I think that David and all the veterans would agree that this is one of the reasons they signed up, was to defend America and people’s right to do exactly what the football players are doing.”

But Beine also made his own statement. He had tickets to the next home game, and he went to listen to the National Anthem as always, leaving right after. But before he left, he set up a memorial to Sonka at his seat. 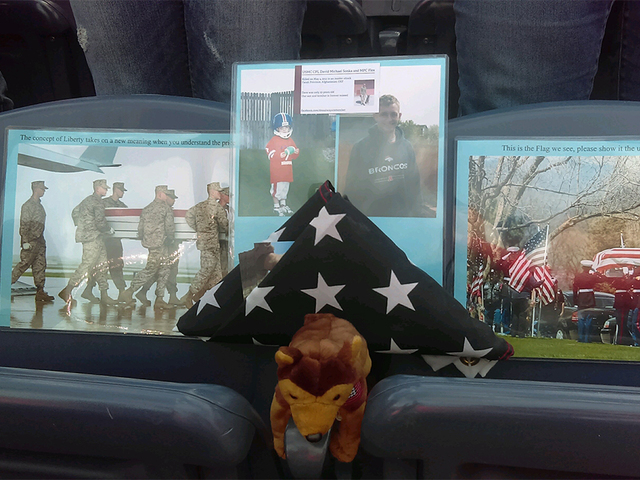 Last month, the Denver Broncos released a statement on the protests which read in part, “Make no mistake – our actions were in no way a protest of the military, the flag or those who keep us safe. We have nothing but the deepest love and respect for those who protect our way for life and the freedoms we enjoy as Americans.”

But it was too little, too late for Beine and his family.

Do you agree with Beine’s decision to walk out of the stadium and boycott the NFL? Are you boycotting the NFL yourself? Share your thoughts and comments below!