Doesn’t it seem like the liberal media has forfeited any right to express outrage over the way President Trump continually refers to them as “fake news“?

A man that had been in the public spotlight for decades and was never once portrayed poorly, became a reality TV star amongst the Hollywood and media crowd and was still hailed as a positive figure, is now suddenly an immigrant-hating racist?

Why? Because he beat their precious muse in Hillary Clinton?

It all began early on in the President’s 2016 campaign when he pointed out that a percentage of illegals crossing the border are in fact, criminals.

The media immediately took his comments out of context, implying that Trump insulted 54 million Hispanics by claiming ‘all of them’ crossing the border were rapists and murderers.

“They take a half a sentence, then they take a quarter of a sentence and put it all together” to fit their narrative he said at the time.

The media rinsed and repeated that whole process when the President made perfectly reasonable comments about MS-13 gang members being animals.

Political cartoonist A.F. Branco visualizes the simple – but effective for the gullible left – methods instituted by a corrupt media … 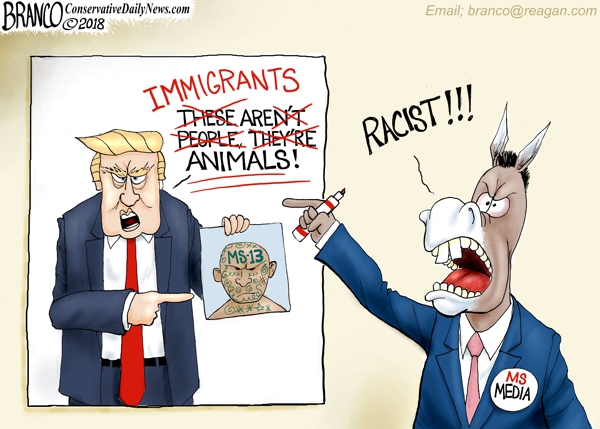 “In an effort to paint President Trump as an extreme racist, the mainstream media deliberately took him out of context when referring to MS-13 as animals,” Branco writes.

Of that, there is no doubt.

CNN, for example, reported his words as applying to sanctuary cities and immigration laws in general when he was very specifically referring to violent criminal gang members.

They then waited upwards of 20 hours to correct their mistake.

The Associated Press essentially did the same thing.

AP has deleted a tweet from late Wednesday on Trump’s “animals” comment about immigrants because … we needed 12 hours for it to marinate and create a false narrative that our unhinged liberal readers could latch onto.

Fixed it for you.

President Trump couldn’t help but take another ‘fake news’ swipe at those outlets for misrepresenting his comments and then slowly, begrudgingly correcting their stories.

Fake News Media had me calling Immigrants, or Illegal Immigrants, “Animals.” Wrong! They were begrudgingly forced to withdraw their stories. I referred to MS 13 Gang Members as “Animals,” a big difference – and so true. Fake News got it purposely wrong, as usual!

It was purposeful. It was, as Branco says, deliberate.

And it’s never going to stop.

Why does the media deliberately misrepresent Trump’s comments? Share your thoughts below!