Public schools are at it again! As if the gender ideology and fluidity curriculum weren’t enough, some schools have taken things to the next level.

Two specific incidents of recent note are within the public high schools and middle schools in Webster Groves School District in Missouri, and Janney Elementary School in Washington D.C.

Suppose it wasn’t clear before that the extreme left-wing of this country is coordinating a targeted assault on the very foundation of our country.

In that case, it should be clear as crystal after you read about these two gems of the public education system.

Webster Groves School District is under the microscope for possibly violating the privacy rights of students and their families. Specifically mentioned are the Family Educational Rights and Privacy Act (FERPA) and the Protection of Pupil Rights Amendment (PPRA).

According to the U.S. Department of Education website, PPRA applies to activities conducted within state education agencies. It includes eight different protected areas:

High school students were told to take two surveys and send screenshots of their answers to their teachers, which in and of itself seems super shady. The surveys were from E-Congress Political Ideology Survey, and I Side With….

The district is scheduled to pay a survey company $19,000 to administer surveys like these that fall within the curriculum’s Social-Emotional Learning (SEL) component.

This SEL concept is another three-letter variation of DEI (Diversity, Equity, and Inclusion) and CRT (Critical Race Theory). Questions that were administered to both the high school students and some to the middle school students were:

“I feel safe to talk about race, culture, and identity at school.”

“I feel supported by my family.”

“Should the government continue to fund Planned Parenthood?”

“What is your stance on abortion?”

The parents who filed the complaint through the Southeastern Legal Foundation have chosen to remain anonymous out of fear that they will be doxxed (have their identities and addresses, etc. made public) or, worse, be targeted by their government.

New Harvard study shows the union push to keep schools closed was *disastrous* for kids. But they don’t pay union dues, do they @rweingarten?

Kids stuck at home “lost the equivalent of about 50 percent of a typical school year’s math learning during the study’s two-year window.” https://t.co/eUSJK9b71m

Students were given something called a “fist book” during this presentation. Again, I’m not sure who they are paying to name these things, but they should ask for their money back.

This “fist book” contains guidance on how to think about race, including:

Nothing in that sounds terrible for our children to be taught, right? Hold on, though; it gets worse:

“White people are a part of a society that benefits them in almost every instance, as if white people walk around with an invisible force field because they hold all of the power in America.”

The “fist book” goes on to ask:

“Where do you see racism in yourself? This requires true soul-searching. Be real with yourself, don’t feel guilt/shame, and own it. It’s the first step in becoming an anti-racist.”

Remember – these children are Pre-K through 3rd grade.

A DC public school made pre-k through 3rd grade students participate in an "Anti-Racism Fight Club" which required students to list out their “racist” family members.

This is what the Left wants taught in every school! Sickening!!

Next Step, Report Your Parents to the Ministry of Love

“Who in your family has racist beliefs? What is your strategy for dealing with them?”

That sounds like a great idea. Tell us six year old little Johnny, who is a racist in your family?

No harm there. If you were wondering what this sounds like, it’s yet another example of our society rapidly becoming the society described in “1984.” Prepare yourself for the government to announce the creation of some ridiculous office like the Acceptance Oversight Group.

Read More about the Ministry of Truth Here

General Randi Weingarten of the Supreme Allied Education Special Interest and Union Group Command (otherwise known as President of the American Federation of Teachers) claimed laws protecting children from gender ideology and parents speaking out against their school boards were akin to starting wars.

She has condoned an environment where schools feel comfortable sending out surveys and workbooks meant to collect data on parents. I wonder what that data will be used for?

Earlier this week, General Randi was ridiculed for stating:

“Our kids are in crisis. And we had a mental health crisis before COVID…but for two years of disruption, two years of looking at the screens, two years of not having a normal kind of routine and rhythm, recovery is really tough. It’s not a shock that a lot of kids, frankly a lot of adults, are still under tremendous stress and anxiety.”

The arsonist pretends to be the firefighter. Disgusting. https://t.co/lRLOQZQ3x1

Wow, welcome to the party, Randi. 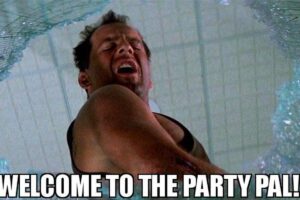 A party you started. However, you are doing a fine job attempting to re-write history. You want to make it seem like you had nothing to do with the two years of abnormal routines and disruption.

The Ministry of Truth would be proud of your doublethink. Don’t be fooled, though; the General chooses her words wisely, and we should pay special attention to the fact that she points out that many adults are under tremendous stress and anxiety.

Almost as if to imply that we cannot handle the crisis. Perhaps she has an idea of who would be better suited; her destructive public education system.

Watch: Biden Repeatedly Heckled During State of the Union Speech, Argues With Republicans in Wild Display