Tragedy often brings out the worst in the media. The horrific events that took place last night in Las Vegas have been no exception. Bodies are still unidentified, motives still unknown, and the media has predictably been quick to pounce on the gun control narrative.

There is something particularly vile about certain mindsets under such circumstances, and with liberalism being a mental disorder,’ even worse thoughts sometimes slip out from weak minds.

A Daily Caller report revealed the inner thoughts of Geftman-Gold – mostly because she posted them on social media for the world to see – and it isn’t pretty.

The Vice President and Senior Counsel of Strategic Transactions at CBS Corporation writes that she has no sympathy for the victims of the Las Vegas mass shooting “because country music fans often are Republican gun toters.”

No, she really did say that. 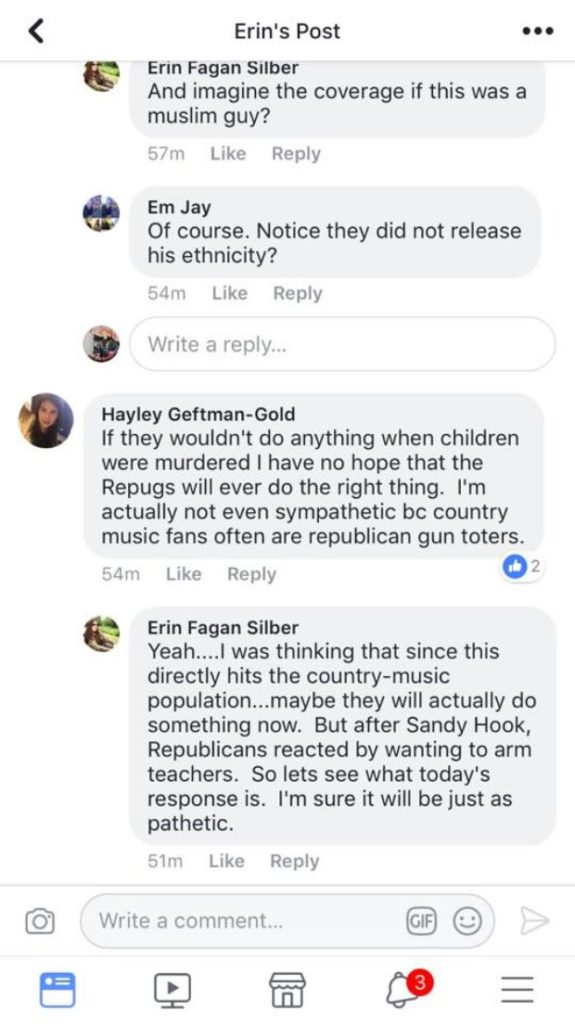 Geftman-Gold made her comments during an online conversation with photographer Erin Fagan Silber, presumably in a discussion about gun control.

Geftman-Gold’s LinkedIn profile lists her most recent position at CBS Corporation, as well as a lengthy stint with MTV and Viacom.

Geftman-Gold also happens to be a big fan of former Democrat candidate for President, Hillary Clinton. So much so, that she held a block party for Hillary on election night in 2016.

The block party was held at the intersection of President and Clinton Streets, where many fans laughed and joked about their candidate’s inevitable win.

By the end of the night, the event organizer lamented “I’m curled up in a fetal position at home.”

Now, Geftman-Gold is actively cheering the possibility that many of the victims in Las Vegas may have been Republicans. That’s how blinded she is by Clinton’s loss it would seem.

What a sick, sick individual.

Are you surprised how people on the left are reacting to the Las Vegas shooting? Share your thoughts below!