Rep. Carolyn Maloney (D-NY) is getting some heat for an image showing her smiling and palling around with a Philippine diplomat who called for a Holocaust-level solution to the drug war.

Maloney posted a picture of her and Philippines’ UN representative, Teodoro Locsin, during the Philippine Independence Day Parade on June 3, 2018, in New York, to her Facebook page.

She instantly drew backlash for cavorting with a man who once stated drug offenders needed “a FINAL SOLUTION like the Nazis adopted.” 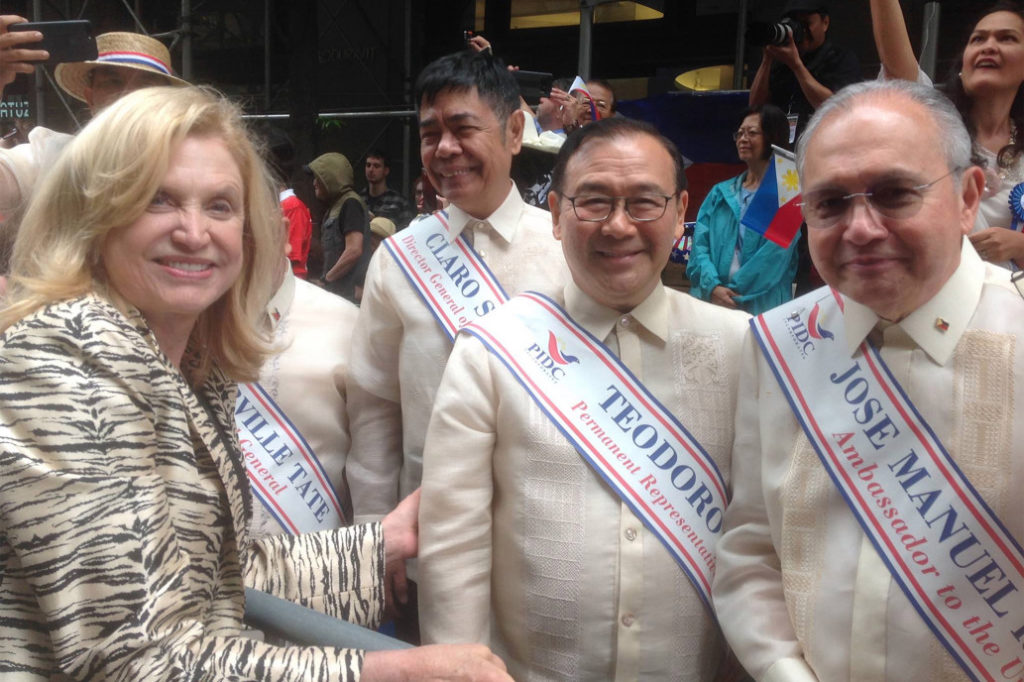 “I believe that the Drug Menace is so big it needs a FINAL SOLUTION like the Nazis adopted,” he wrote. “That I believe. NO REHAB.”

I believe that the Drug Menace is so big it needs a FINAL SOLUTION like the Nazis adopted. That I believe. NO REHAB.

Locsin was responding to criticism of a previous tweet in which he said, “police are scum.”

We certainly hope Ms. Maloney doesn’t support any of these statements, though it’s difficult to know when you associate with a man of this mindset.

This isn’t exactly a one-off for Mr. Locsin, as he’s previously defended Hitler for being “right” about “some things.”

No. But some things he did right. Why we invited A Nazi to advise us after the war.

He’s also previously declared that the “Nazis were right after all” when discussing a humanitarian crisis in Europe.

@VictoriaLIVE @BBCNews So the Nazis were right after all. C’mon, just say it because anyway, Europe will do it.

Maloney, who’s been in office since 1992, is facing a Democrat primary challenge from Suraj Patel, a 34-year-old hotel executive, and professor who has never been elected to anything.

Posting a photo with a known anti-Semite seems like the kind of mistake a rookie would make, not somebody like Maloney who has served 13 terms in Congress.

A spokesman for Human Rights Watch blasted Maloney and warned about engaging in photo ops with people associated with a regime being investigated for “possible crimes against humanity.”

Rep. Carolyn Maloney is coming under fire from human rights activists for hobnobbing with Philippines’ ambassador to the United Nations, Teodoro Locsin, who likened his country’s brutal anti-drug campaign to the Nazis’ “Final Solution,” the New York… https://t.co/6KDkTizKek

“US lawmakers need to be aware of the reputational risk of smiling photo ops with representatives of the government of Philippine President Rodrigo Duterte,” Human Rights Watch said.

Locsin, they explain, “has been a full-throated cheerleader for an anti-drug campaign that has killed at least 12,000 men, women, and children since July 2016.”

Does Maloney support this man? She needs to answer some serious questions.