By David Ditch for The Daily Signal

Many important elements were already clear. It would recklessly boost federal spending at a time of already high inflation, impose ruinous tax hikes when the post-pandemic economic recovery is still vulnerable, and impose an anti-work welfare state.

However, due to the incredible length of the bill—2,465 pages, or about the length of two King James Bibles—there are thousands of separate provisions, far more than can be properly analyzed by legislators or the public. 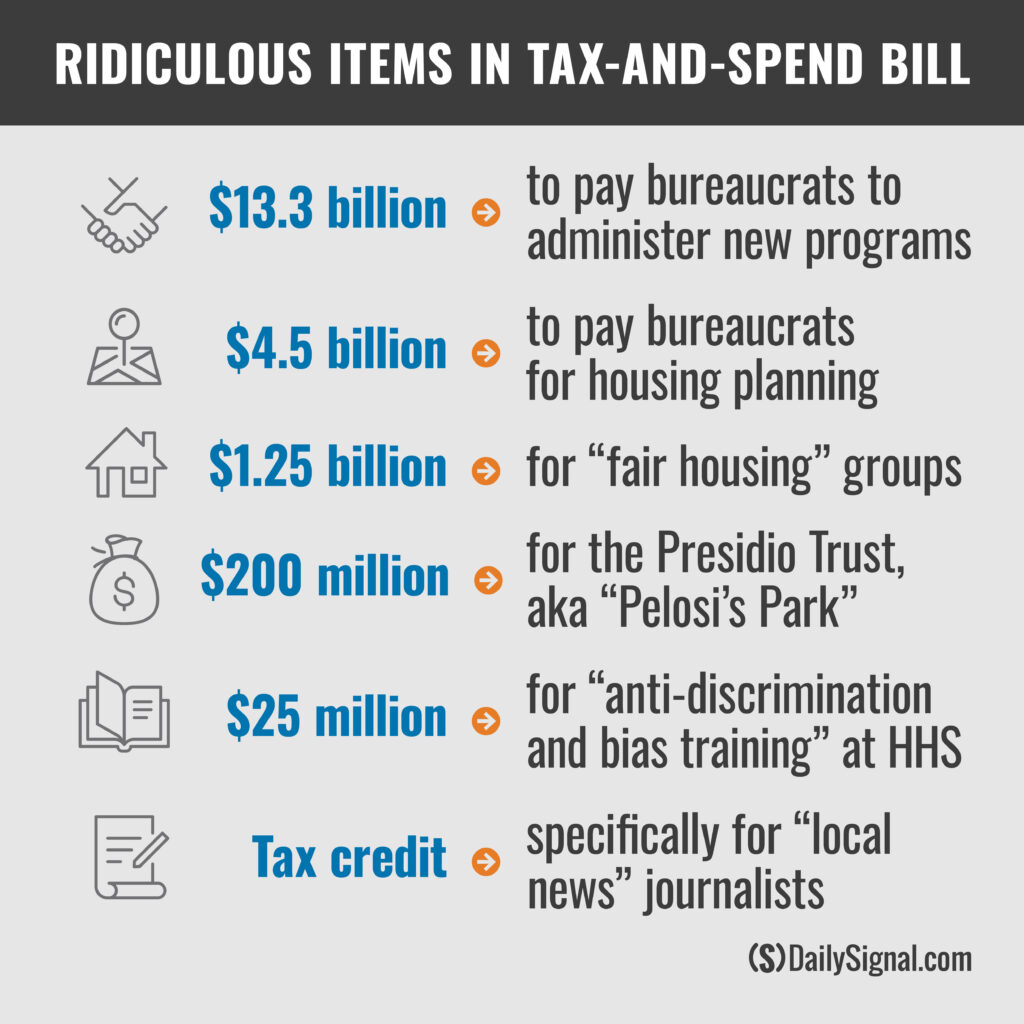 The following are just 10 of the ridiculous things buried in the bill.

1) $25 Million for ‘Anti-discrimination and Bias Training’ at HHS

There have been several instances of federal agencies promoting critical race theory and similar far-left agendas to employees. In Section 31056 of the bill, Congress wants to legally mandate such training at the Department of Health and Human Services, the largest nondefense agency.

The idea that an agency focused on administering social benefits programs is a haven of racists ought to be laughable, but apparently House Democrats think otherwise.

Section 70203 of the bill earmarks $200 million for Presidio Trust, a park located in the north end of San Francisco, which is represented by House Speaker Nancy Pelosi, D-Calif.

The Presidio park contains many scenic views and even a golf course. San Francisco is one of the wealthiest parts of the country and can easily afford to support the park, which makes this handout egregious even without Pelosi’s involvement.

While the bill contains many tax hikes, it also opens loopholes for some politically favored groups. One of these, Section 138517, would give a tax credit toward “compensation for local news journalists.”

The secretary of the treasury is required to issue “regulations and guidance as are necessary,” which could allow the government to determine what counts as “news.”

Worse, the tax credit is “refundable,” meaning that a money-losing organization would get a check from Uncle Sam, rather than simply not owing anything. That means it’s corporate welfare.

That would serve to prop up media organizations that the public doesn’t consider valuable enough to support voluntarily. Apparently, we need to be forced to do so.

4) $1.25 Billion for Activists, Bureaucrats to Go After Landlords

The activist left insists that housing is a right—and that this supersedes fundamental private property rights, including the ability of property owners to exclude others from squatting or to evict tenants who refuse to honor their rental agreements.

The federal government advanced this notion with its unconstitutional eviction moratorium under the guise of preventing the spread of COVID-19.

Now, Congress wants to fund anti-property activists and regulatory enforcers to the tune of $1.25 billion, including erecting legal hurdles for property owners merely trying to defend their rights in court against delinquent tenants.

Sections 40106 and 40107 might not explicitly require funding for left-leaning groups, but phrases like “fair housing organizations” can only be reasonably understood to mean exactly that.

The bill seeks to impose a federal takeover of housing policy, both through the construction of massive amounts of public housing and by strong-arming local governments into changing zoning rules.

Bending local communities to the will of Washington elites on the texture of local neighborhoods undermines the ability of families and local governments to determine for themselves the distinctive features of their communities.

While there are many opportunities to reform housing policy, one-size-fits-all federal mandates are the wrong approach. Yet Section 40103 would dedicate $4.5 billion just for bureaucrats at all levels of government to “develop” and “evaluate” housing plans.

The private sector could construct tens of thousands of housing units for that amount of money, but this bill would rather tax businesses to pay bureaucrats to think about building houses.

Congress is on the verge of passing a $1 trillion-plus infrastructure package that came together following months of bipartisan negotiations.

The package already moves federal transportation policy solidly to the left, including many new programs relating to “social justice” and “climate.”

One of the reasons why some moderate Republicans supported the bill was that President Joe Biden promised not to include more transportation funding in the Democrat-only $3.5 trillion social spending bill, since that would mean the bipartisan negotiations were not a true give-and-take.

However, Sections 110002 through 110012 of the partisan bill contain a total of $26.5 billion for rail, slush funds, and Green New Deal transportation programs.

That’s exactly the “double dipping” that Biden vowed to avoid, and is yet another reason why Congress should move away from the flawed bipartisan bill before it’s too late.

The legislation contains trillions of dollars’ worth of new benefit programs. Normally, the price of a program is understood to include the cost of paying the government employees who administer it, along with any necessary public awareness activity.

Yet this bill is littered with at least $13.3 billion in additional funding specifically for federal bureaucrats and billions more for ad campaigns, on top of the trillions in program costs.

Even smaller education provisions are flawed. Section 20006 of the bill would give $197 million for “Grow Your Own,” a concept that prioritizes schools hiring teachers that live nearby.

Such staffing decisions are fair game for local districts and school boards, but the federal government should not use taxpayer dollars to micromanage those choices.

One of many housing initiatives in the bill, Section 40105, would give $7.5 billion for a “community restoration and revitalization” fund.

The money would go toward nebulous concepts, such as “creating equitable civic infrastructure” and “capacity building,” which would give bureaucrats the ability to fund housing projects or left-wing activists as they see fit.

Unfortunately, such place-based subsidies fail to help those in need and are often susceptible to inefficient allocation or even corruption.

Sections 80010 and 80011 would provide $2.35 billion for the Federal Citizen Services Fund, which deals with government websites and information technology for the executive branch.

That sort of largesse (at taxpayers’ expense) demonstrates the complete lack of prioritization that characterizes the legislation.

These ridiculous items are just 10 of the countless reasons why Congress should steer clear of the largest tax-and-spend bill in world history, which would impose real costs on the economy and on American society.

Syndicated with permission from The Daily Signal.

FBI Caught In Another Scandal, Lying To Judge For Warrant To Loot Random Safe Deposit Boxes