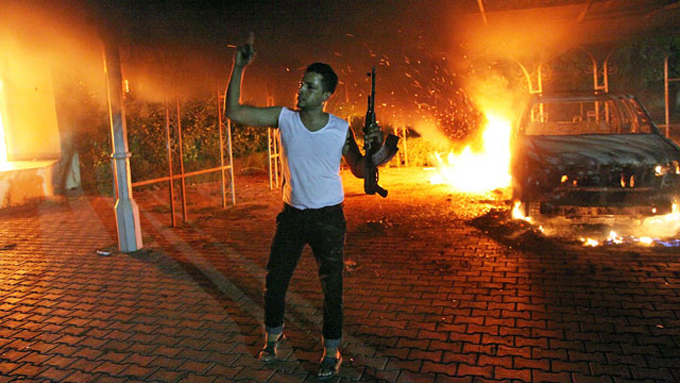 Of course, you remember the infamous moment in the second presidential debate when moderator Candy Crowley interjected to wrongly say that Obama had called the Benghazi attack an act of terror on September 12, 2012. It turns out CBS sat on a clip of the president refusing to call the attack terrorism in an interview with Steve Kroft of “60 Minutes” from September 12th.

Here is the exchange that CBS hid – even from Attkisson who was heavily involved in reporting the story – until the waning days of the election (emphasis mine):

KROFT: Mr. President, this morning you went out of your way to avoid the use of the word “terrorism” in connection with the Libya attack. Do you believe that this was a terrorist attack?

OBAMA: Well, it’s too early to know exactly how this came about, what group was involved, but obviously it was an attack on Americans. And we are going to be working with the Libyan government to make sure that we bring these folks to justice, one way or the other.

Instead, CBS repeatedly aired a more ambiguous clip from the interview that Attkisson used for an October 23rd segment on “CBS Evening News:”

SHARYL ATTKISSON, CBS INVESTIGATIVE CORRESPONDENT: Fourteen hours after the attack, President Obama sat down with Steve Kroft of “60 Minutes” for a previously scheduled interview and said he did not believe it was simply due to mob violence.

OBAMA: You’re right that this is not a situation that was exactly the same as what happened in Egypt. And my suspicion is that there are folks involved in this who were looking to target Americans from the start.

Attkisson was outraged when she found out that CBS hid the footage from her and the American people at such a relevant time:

Attkisson said, “Let me say that that exchange should have been pulled out immediately after the debate, which would have been very newsy at the time. It was exclusive to CBS. It would have to me proven Romney’s point against Obama. But that clip was kept secret.”

“I was covering Benghazi, nobody told me we had it and directed me from the ‘Evening News’ to a different clip of the same interview to give the impression that the president had done the opposite. And it was only right before the election that somebody kind of leaked out the transcript to others of us as CBS and we were really shocked. We saw that was something very unethical done to have kept that up.”

She added, “The ‘Evening News’ people who had access to that transcript, according to the emails that I saw when it was sent from ’60 Minutes’ to ‘Evening News’ the very day it was taken, they, in my view, skipped over it, passed it up, kept it secret. And I think that was because they were trying to defend the president and they thought that would be harmful to him.”

Obamacare Architect: Americans Were Misled So Bill Could Pass

Alexa is a freelance writer and communications consultant, with experience working on the Hill, at the RNC, and for National Review. She is based in Northern Virginia and blogs at AlexaShrugged.com. Follow her on Twitter @AlexaShrugged.