A Trip Down Memory Lane: When Trump Beat Hillary

It’s now been over a year since the 2016 election – and who could forget those who never saw the results coming?

One wouldn’t have been crazy to see Hillary’s victory as inevitable. After all, that’s the narrative the entire media presented. Even the day prior to the election, the Huffington Post hilariously gave Hillary a 98.1% chance of winning. The New York Times “estimate” wasn’t off a whole lot from its fellow liberal publication. 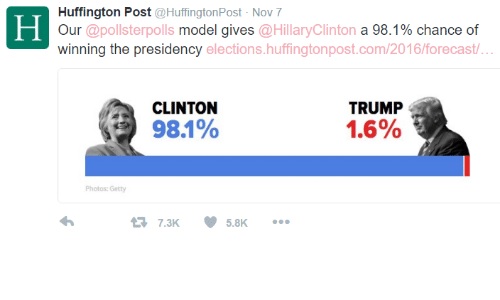 Even Hillary bought the hype – which is perhaps why she didn’t campaign in Wisconsin. Below is my favorite headline to come out of the 2016 election, dated October 24th: 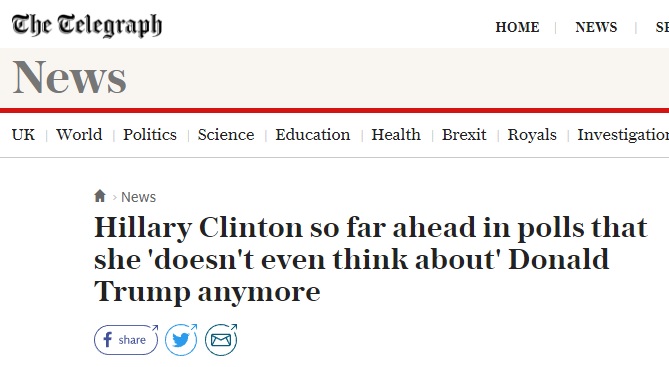 Not thinking about Donald Trump was a fatal flaw, as we all soon found out.

But enough about what the polls claimed. It’s the smug talking heads and celebrities out there who mocked Trump’s “doomed” campaign that are truly fun to laugh at. In an ultimate compilation of those in the media who informed us that “Trump will never win,” it begins with now-HBO host John Oliver begging Trump to run.

“Do it, do it. Look at me, do it,” pleads Oliver. “I will personally write you a campaign check now on behalf of this country which does not want you to be president, but which badly wants you to run.”

Oh, Mr. Oliver, we didn’t just want Trump to run, but also to win. You’d get that if you were an actual citizen of this country.

The video then cuts to conservative commentator Ann Coulter being laughed at by HBO host Bill Maher and his audience for her Trump victory prediction. Then-President Obama chimes in with his Trump jab on a late-night show where he says, “At least I will go down as president,” and then mic-drops his cell phone.

Watch below and enjoy:

Share this hilarious video with others now and relieve 2016 election night!

This Is The Only Gun Modification That Matters