For as large as VICE News has become, boasting tens of millions of fans on their social media pages, their venture into television hasn’t gone nearly as well.

VICE owns their own television channel called “VICELAND,” which you’ve probably never heard of because nobody watches it. The network attracts fewer than 96,000 viewers under the age of 50 (VICE’s target demo is millennial). Not only is that atrocious viewership, it’s half the viewership of the failing network that VICELAND replaced, H2 (a History Channel companion channel).

In a desperate attempt to finally attract some eyeballs to their failing network, VICE will be releasing a feature called “The Hunt for the Trump Tapes” with Tom Arnold. Somewhat famous as an actor in the 90s, Arnold is better known today for his bizarre Twitter rants against the Trump administration. He’s also the ex-husband of Roseanne Barr. (RELATED: ABC Confirms ‘Roseanne’ Will Return to the Air, Without Roseanne Barr).

“The Hunt for the Trump Tapes” coming to @Viceland this fall pic.twitter.com/T6UR0GFRJb

Yesterday, after prior posts suggested that Michael Cohen may play a role in the film, Arnold posted a photo of himself with Cohen. “I love New York” he captioned it.

A user asked “Tom, you seem pretty happy. Can you please at least let us know on a scale of 1 to Trump is definitely going down how happy you were after this meeting?” Arnold replied, “Trump is going to quit..we are still here at The Regency.” 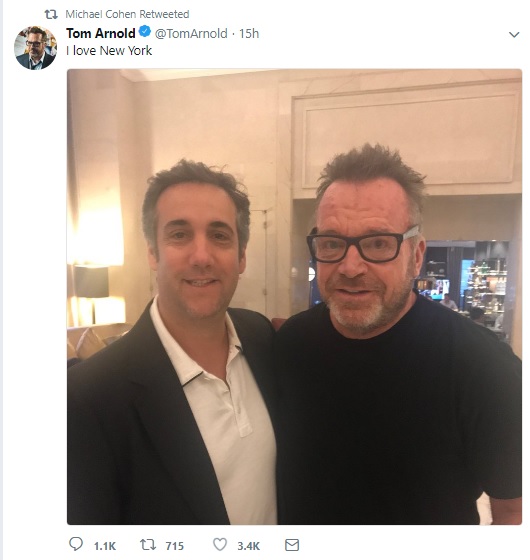 Arnold told NBC News that he met with Cohen, and that “This dude has all the tapes — this dude has everything. I say to Michael, ‘Guess what? We’re taking Trump down together,’ and he’s so tired he’s like, ‘OK,’ and his wife is like, ‘OK, f— Trump.’”

This comes as Cohen’s business activities are being probed by the FBI, which could result in potential charges of bank fraud, wire fraud, and violations of campaign finance law. (RELATED: FBI Raids Office Of Trump Lawyer Michael Cohen).

Michael Cohen has not confirmed that Arnold’s characterization of their relationship is accurate.

Arnold’s claim seems very questionable, and there is no concrete evidence that Cohen would betray President Trump. Perhaps Arnold is seeking publicity and is exploiting Cohen’s legal issues to promote his struggling career.