A photo showing a crying child became a viral sensation for media outlets hell-bent on spreading lies about President Trump’s illegal immigration policies last month, culminating with a Time magazine cover that featured an image of a towering President photoshopped in front of her.

CNN, the ultimate purveyor of fake news declared, “The crying girl is quickly becoming the human face of President Donald Trump’s new ‘zero-tolerance’ immigration policy, which has resulted in separations of undocumented parents and kids.”

To nobody’s surprise, the story behind the crying child didn’t match the lies being peddled by an anti-American, open-borders media. The border separation policy is the same that was sporadically enforced under Obama, Bush, and Clinton, it’s simply being enforced now. That’s the reality. As for the little girl, she had never been separated from her mother. (RELATED: Here’s The Truth About The Crying Girl On The Cover Of Time).

In retrospect, political cartoonist A.F. Branco imagined what would have been a better, more accurate cover for Time, and it’s a beauty.

“Instead of Time Magazine creating the phony scenario of a crying little girl looking up at Trump on the cover, a Democrat donkey would have been a much better fit,” he writes. 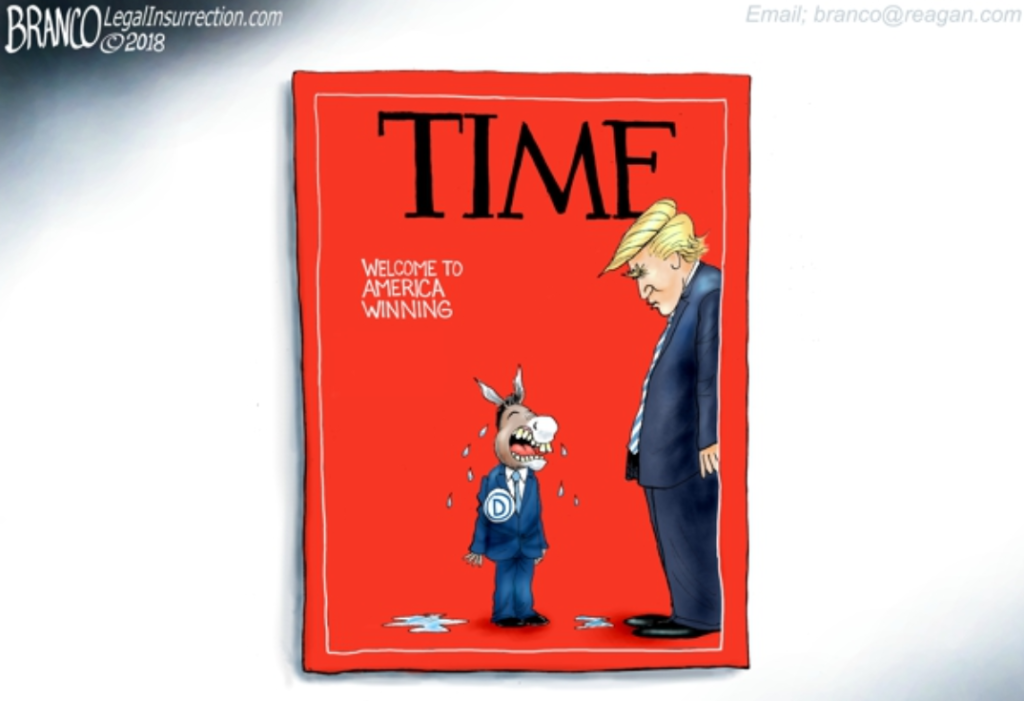 Indeed, the Democrat Party and the media (we know, they’re one in the same) have done nothing but cry over fake narratives, cry over Trump’s enforcement of the law, and cry over Trump’s presidency in general.

As an example, MSNBC host Rachel Maddow broke down in tears during a broadcast of her show, forcing her to end the segment early before she could read an Associated Press report meant to close the show. (RELATED: Rachel Maddow Cries Over Exact Policy Obama Enforced).

Of course, the tears all started on election night when the once confident Hillary supporters ended their night in tears.

Protester Screams in Agony as Trump Sworn in as President https://t.co/OAGVivWutm pic.twitter.com/OgyUvACx8M

And it continues even today.

How bad has it been? Even the super unmanly Barack Obama told Democrats they need to stop whining and get on with their lives.

“Enough moping,” he told supporters. “This is a mope-free zone.” (RELATED: Obama to Dems: Quit Crying About Trump and Do Something About It).

You know it’s bad when Obama has to tell you to man up.

FACT CHECK: Ocasio-Cortez Says Illegal Immigration Was Not Criminalized Before 1999