Roseanne Barr just put another feather in her cap. Her reboot of the classic 90s sitcom “Roseanne” is an unquestionable hit. For the third week in a row, Roseanne’s titular show had a record number of viewers. In fact, every other competing show didn’t come close to the kind of ratings her program received.

From TV by the Numbers: 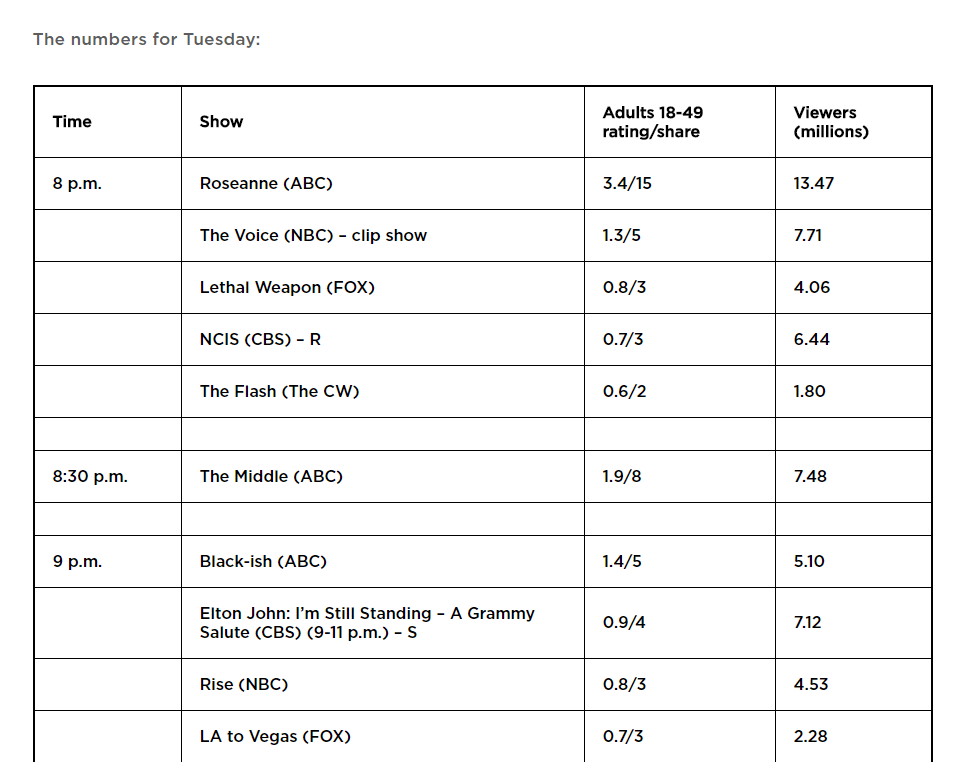 Amazing. Look at this. Roseanne got a 15 share last night. The show that played right after it, “The Middle,” got a 6. Nothing else on nets last night got higher than a 5. https://t.co/Ww3ti077tf

From the Hollywood Reporter:

Roseanne continued its impressive streak Tuesday night on ABC, with the comedy only down by relatively slim margins in its latest outing.

Night three, technically the revived sitcom’s fourth episode, averaged a 3.4 rating among adults 18-49 and 13.5 million viewers. The show’s total audience was down 12 percent, though Roseanne retained more than enough momentum to rank as the No. 1 Tuesday telecast across the board.

By voting, you agree to receive email communication from The Political Insider. Click HERE for more information.

“Roseanne” may have dipped slightly from its week 2 showing, but it’s still outperforming every single competitor. That’s really remarkable, but for any media analyst paying attention, it shouldn’t come as a surprise. Evening television, especially sitcoms, has been starving for ideological diversity. For too long, too many mainstream TV shows repeated liberal platitudes without question. Now, we have a hit sitcom with an unapologetic Trump supporter leading the cast.

Roseanne has had three stellar weeks of record ratings. Her show – and the discussion it has sparked on conscious right-wing opinions in popular culture – isn’t going away. It’s already been renewed for another season. It looks like the Tanner family will continue to annoy liberals with their success.

Do you watch “Roseanne”? Will you start watching the show? Tell us what you think about “Roseanne” below!

Bank Of America To Cut Off ‘Military-Style’ Gun Manufacturers