The Hill, a liberal Washington-based media outlet, let their bias show in one of the most slanted anti-Trump stories related to the ongoing crisis in Puerto Rico.

One of the publication’s most viral articles was posted on Twitter with the headline, “Trump denies Puerto Rico request to let hurricane victims use food stamps for prepared hot meals: report.”

And judging by the outraged comments, nobody actually bothered to click through to the actual article, which completely contradicts its headline. 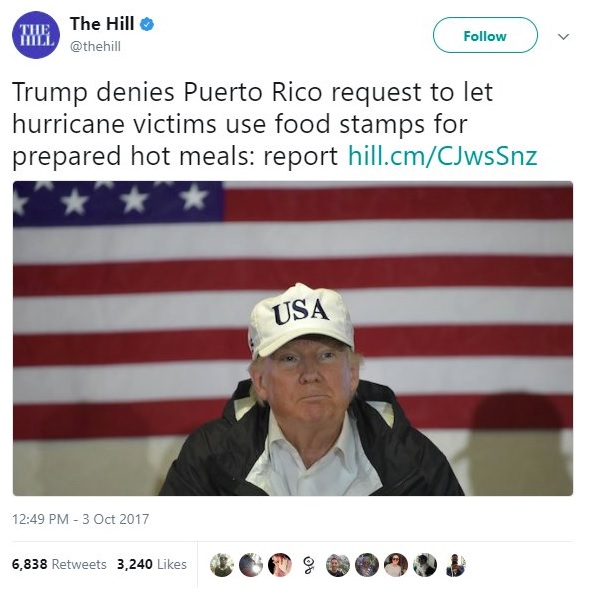 Note: I use a photo of the above tweet because it has since been deleted – thanks to me, but not to brag.

Here was just one of the disparaging comments posted in response to the misleading headline.

WOW. This man has a black heart. He only cares about himself.Hell has a seat waiting for him!

Once you click through to the actual article, however, you’re greeted with a much different headline: “Trump officials allow Puerto Ricans to use food stamps for fast food.” The article then goes on to explain how the Trump Administration expanded what food stamps could be used to purchase to help hurricane victims in Puerto Rico.

The article then goes on: “In a letter dated Sept. 30 and obtained by The Hill, the U.S. Department of Agriculture (USDA) said recipients of the island’s Nutritional Assistance Program (NAP) would be able to use their benefits to purchase hot food at any store through November.”

Normally, food stamps can’t be used to purchase hot or prepared food. This is to encourage food stamp users to purchase food in grocery stores, which is often cheaper and healthier.

So how did “The Hill” screw up that badly? The editors and writers jumped the gun and didn’t get the full story before reporting.

UPDATE: After denying a waiver, Dept of Agriculture sent a letter to PR approving a waiver that would allow food stamp use to buy hot food.

And yet, they still left the viral tweet with the headline up for a while even after it was a confirmed lie.

The sad thing is that thousands of people continued to retweet it, believing the false headline.

Share this story now to show others the media is out to destroy President Trump!