An incredible new portrait of President Trump contains a subtle message for social justice warriors and college snowflakes about leaving their liberal mindset behind and learning to succeed in the real world on their own.

The painting, titled Teach a Man to Fish, shows a young man sitting on a bench alongside President Trump, accompanied by a tackle box. The President is holding a fishing pole, offering it to the young man.

The message is from an old proverb which helps explain the mindset that divides Republicans who are pro-work and reward and Democrats who like handing out free gifts.

In other words, teaching someone to help themselves is a far better virtue than giving them a handout.

My new painting, “Teach a Man a Fish.” — “You can give a man a pole. It doesn’t mean he will use it.” —JonMcNaughton.com pic.twitter.com/yEvMO8sBZo

The painting was created by world-renowned artist Jon McNaughton and contains another subtle message within. Take a closer look at the young man’s books that he has left on the ground.

Two of them are titled Socialism and Justice Warrior.

“I imagined President Trump sitting next to a young college student,” McNaughton writes. “His pack is beside him and his Socialism and Justice Warrior books laid aside. He listens to Trump’s proposal and looks at the different bait he can use to catch his fish.”

“Trump offers him a fishing pole,” he adds. “Each of us has the freedom to choose our own destiny.” 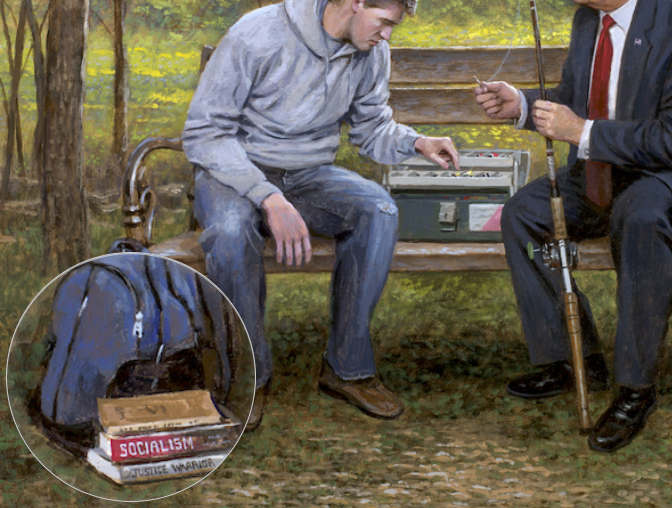 The only remaining question is this – Will the young man choose the path to provide for himself, or will he remain with his victim mentality looking for handouts like any good socialist would?

“You can give a man a pole,” McNaughton explains, “it doesn’t mean he will use it.”

There’s always this updated version of the proverb:

Give a man somebody else’s fish for a lifetime, and you’ve created a Democrat.

Is this painting taking a subtle jab at the left? Share your thoughts with us in the comments section below!