The Remnants Of Obama’s Legacy Revealed In One Picture

By the time President Trump is through with his second year in office, there might not be anything left of his predecessor’s legacy to see. What will he do for an encore the other two, or maybe even six years?

You’ve already heard of a very extensive list of Obama-era reversals under President Trump, including pulling America out of the Paris Climate Accord, reversing pro-illegal immigration executive orders, rescinding countless government regulations, repealing the Obamacare individual mandate, and of course, culminating with pulling out of the Iran nuclear agreement.

The President is even slipping in other policy reversals to further diminish the Obama legacy. Liberals have been borderline apoplectic over the administration pulling back on protections for transgender prisoners implemented under Obama.

The problem, you see, is that the White House wants transgender people in prison to be housed using “biological sex as the initial determination,” not as Obama would have preferred, based on their made-up identity.

In other words, the party of ‘science’ is mad that prisoner placement will now be based on actual biology.

Trans prisoners are 13X more likely to be sexually assaulted, and SCOTUS has held that govs can be liable for failure to protect based on this knowledge.

This policy—clearly based on bigotry—will cause untold suffering & the people will be liable for it. https://t.co/Cmr2AkyztL

He seems to have misspelled ‘biology.’

This transgender prisoner policy comes on the heels of other Obama-era policies. Meaning the only real thing the former President has on his resume is the fight for transgender bathrooms … and Trump is even reversing THAT!

Aside from the prisoner flap, the Education Department halted investigations into transgender bathroom complaints in schools …

The Education Department said this week that it won’t intervene on behalf of transgender students who have been prohibited from using school bathrooms that match their gender identity. https://t.co/1ovAkw8ZQ6

And has tried to limit transgender participation in the military …

The president has faced continued judicial resistance on such matters as DACA, the travel ban, and the presence of transgender troops in the military https://t.co/tvhmilxhQN

With all of that in mind, we thought this cartoon was the most impressive visual display of what’s left of Barack Obama’s legacy. 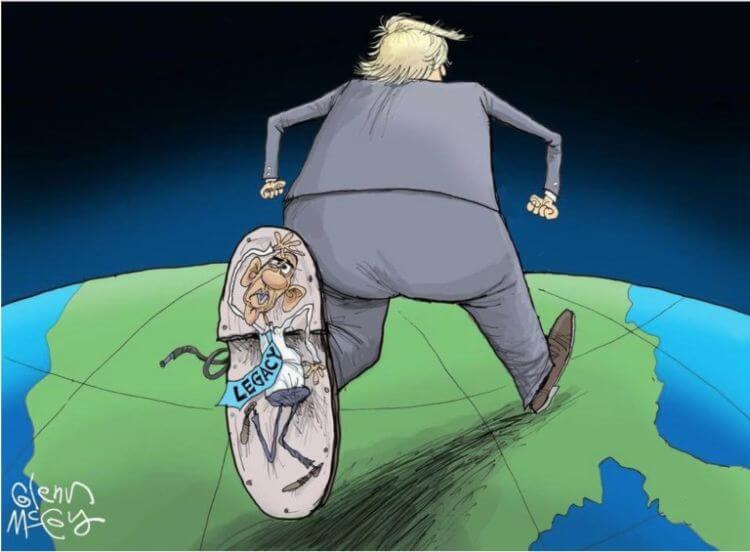 President Trump has destroyed Obama’s legacy by introducing common sense back into policy making. And America is better for it.

Do you appreciate Trump destroying Obama’s legacy? Share your thoughts below!

Bill O’Reilly Could returns to Cable News on Newsmax