Well, it’d be a really close race to the bottom, to be honest. But we think we’ve finally figured it out.

House Minority Leader Nancy Pelosi has been a dream come true for Republicans as of late, spitting out comments that have aided in closing the gap between parties for the midterm elections. Vowing to repeal tax cuts, actually raise taxes, and calling Middle-Class employee bonuses “crumbs” have helped squash the notion of the vaunted ‘blue wave’ come November.

Then there are the obvious issues she has forming actual thoughts. During a recent event to discuss the GOP tax cuts, Pelosi couldn’t figure out if it was millions, billions, or trillions that were going to corporations.

“A big chunk of that, uh milli-, uh billi-, uh a trillion and a half dollars will go to corporate America, but don’t worry they are going to create jobs, raise wages, give bonuses and the rest,” she sarcastically stated.

Despite her track record of idiocy, there is actually one person who outdoes her in the low-IQ department. When the two are in the same room together, it actually makes Pelosi look smart by comparison: 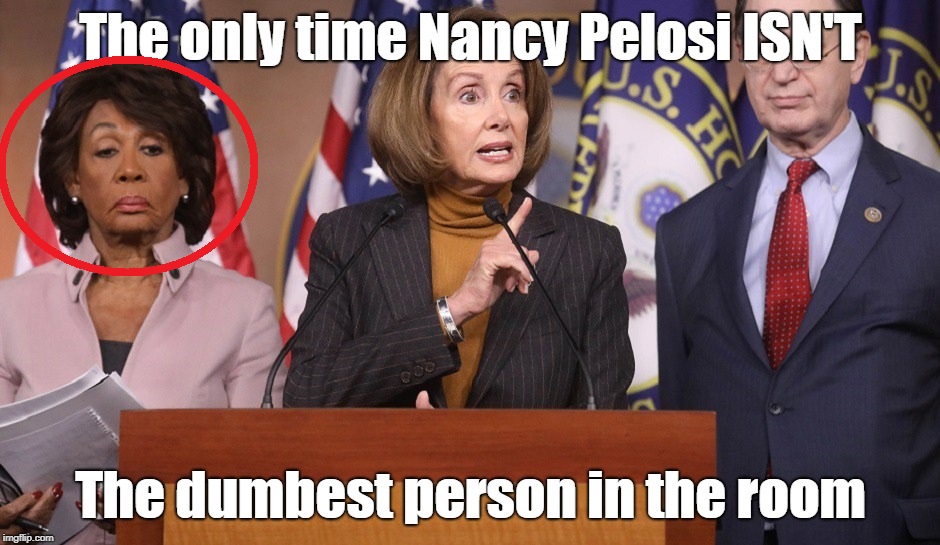 Aside from seemingly only having a vocabulary that consists of one word and one number – “Impeach 45!” – she has been on a true roll of late.

At a union rally recently, Waters blasted President Trump for being “no friend to organized labor.”

Things got out of hand when she melted down shouting, “Damn this President!”

Maxine Waters: “We’ve been there for you. We’re gonna stay there for you. And damn this president! We’re not going to let him destroy organized labor.”

Here she is acting like an unprofessional dolt on the floor of the House when asked to yield her time.

“Don’t you dare talk to me like that!” she added.

“Don’t you dare talk to me like that and think that somehow women don’t understand what goes on the floor of automobile dealers.”

She is, and always will be, an unprofessional joke in Congress, one of the many reasons their approval rating is atrocious.

Waters also believes that Trump’s latest actions in withdrawing from Obama’s Iran nuclear agreement are grounds for impeachment. In fact, in her view, “impeachment is the only answer.”

Trump, further isolating the United States, thinks he knows better than our negotiators and all of our global allies who agreed to the Iran deal. How long do we have to suffer his gigantic ego and narcissistic behavior? Impeachment is the only answer.

Is it any wonder she is now widely known, thanks to President Trump, as a low-IQ individual?

Who do you think is dumber – Maxine Waters or Nancy Pelosi? Tell us your thoughts below!