If you woke up this morning not having watched Joe Biden’s acceptance speech at his basement DNC convention and turned on the news or read the papers or scrolled through Twitter to see how it went, you would be treated to a barrage of media praise for Biden and the low-budget production it capped off.

The media is banking on the fact that no undecided voter actually watched the virtual train wreck that was the DNC.

Given how dreadfully low the ratings were, that’s actually a pretty good bet.

CNN’s Amanda Carpenter, the woman who once shilled for Jim DeMint and Ted Cruz but found liberal Jesus in the form of a CNN paycheck, found herself emotionally unable to contain herself during the DNC.

On Twitter, she asked for “an honest tally” on the number of times the DNC “made you cry.”

I need an honest tally from all you who watched all four nights of the Dem convention telling me the number of times the programming made you cry. Go.

Not to be outdone, the Washington Post’s token “conservative” Jen Rubin’s twitter feed looked like a Babylon Bee parody of herself. Genius! Pure Genius! A Home run! And Gorgeous! were just a few of the deep thoughts Rubin shared about the Biden speech. 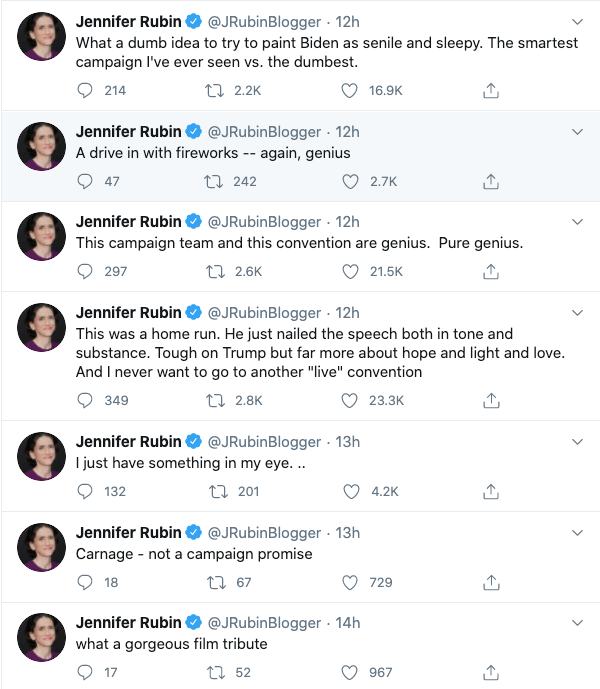 Politico, which long ago stopped pretending to be objective, treated the Biden speech with all the fluffing we could have expected.

Chief political correspondent Tim Alberta opined, “We’re watching an old ballplayer whose skills have diminished turn in a career-best performance in the biggest game of his life. Remarkable to witness.”

All of this was pure gas-lighting by a media desperate to help Biden shake his well-earned reputation for rambling and confusion.

RELATED: Joe Biden Goofs Again In DNC Speech: ‘There’s Never Been Anything We’ve Been Able To Accomplish When We’ve Done It Together’

Biden Reading a Teleprompter Proves Nothing

Biden’s speech last night proved one thing:  that he is a capable of reading. Outside of proving an elementary level of reading ability, Biden’s speech did nothing else.

Biden’s COVID-19 “plan” is 90% promising to do things President Trump has already done – like encouraging the development and deployment of rapid tests and bringing back PPE production from China – and 10% Tin Pot Dictator promises, with Biden vowing to impose a national mandate on mask wearing (ignoring the fact that the President, regardless of what party he is in, has no such authority).

While the Biden COVID-19 “plan” is largely plagiarized, the Biden economic “plan” is heavy on rhetoric, short on concrete policy proposals, and ignores Biden’s own record.

Before the pandemic, President Trump had led the economy to record high stock markets and record low unemployment.

At least with the virus and the economy, Biden pretended to have a plan. In the shortest acceptance speech in modern history, Biden barely even touched on immigration, healthcare, climate change, or gun violence.

The Biden 2020 campaign is a mirror image of the Clinton 2016 campaign – its central theme, and the only thing keeping its coalition of the aggrieved together, is pure hatred for Donald Trump.

The same mainstream media that was deeply in the tank for Hillary in 2016 is just as invested in Biden – if not more so.

But their efforts failed in 2016, and they will fail again this November.

Buckle up America, the next few months are going to be a hell of a ride!