Live By the Sword, Die By It: The Delicious Downfall Of Rick Wilson

Rick Wilson was a little known Republican operative before 2016. A little known operative with mountains of crushing debt. A guy desperate for a reinvention to rescue his career. 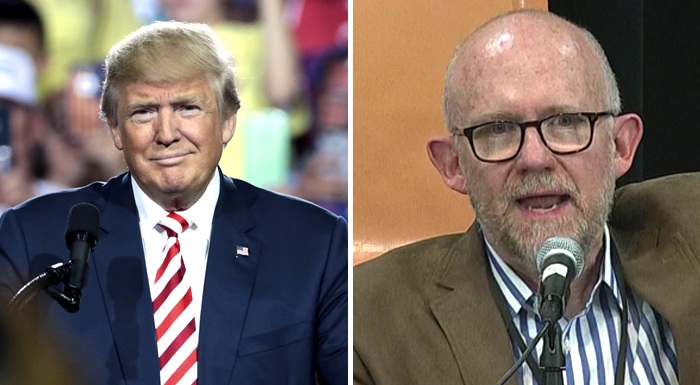 Wilson hitched himself to Trump as Trump began his meteoric rise to the top of the GOP. Wilson didn’t take the route of some opportunists and become Trump’s number one fan, instead Wilson sought to reinvent himself as Trump’s number one critic.

And to Wilson’s credit, it worked.

The Rick Wilson reinvent made him a NeverTrump star.

Wilson carved out a lucrative space in the left-wing media. He’s the guy willing to say anything – no matter how vile or how baseless – to try to damage Trump. Wilson’s schtick – half wannabe Andrew Dice Clay, half Krassenstein brothers tin foil hattery – became a fixture on MSNBC and CNN.

Every time Wilson’s schtick crossed the line – like when he demeaned Trump supporters as “boomer rubes” on Don Lemon’s show – Wilson’s retort has been to claim that his critics are acting in bad faith and that Trump and his supporters simply don’t like anyone who punches back.

It’s worth noting that Wilson apparently doesn’t like anyone who punches back either. Since he is famously quick to block anyone on social media who disagrees with him (myself included).

No matter how any times Wilson spun baseless conspiracy theories and no matter how many times he tossed around vulgar insults, the left-wing media would continue to indulge him.

Then this week happened. In the midst of the fallout from the death of George Floyd – and the ensuing protests and riots around the Black Lives Matter movement – The Lincoln Project, co-founded by Wilson, launched an incendiary attack on Trump with an ad claiming Trump was the “second President of the Confederacy.”

The liberal media lapped up the ad – giving it millions in free air time. Of course that further lined the pockets of Wilson and company, whose Lincoln Project PAC has repeatedly been referred to as a “grift” and a “scam.”

The only problem for Wilson is that the real fan of the Confederacy and white nationalism isn’t President Trump. It’s Rick and his wife.

Caught In Web Of Deceit

Photos of Rick and his wife’s cooler – emblazoned with a giant Confederate battle flag and the phrase “THE SOUTH WILL RISE AGAIN” – emerged on social media. Wilson initially deleted the picture from social media. Then, he claimed it was fake. Unfortunately for Wilson, more photos of the racist cooler emerged from his wife’s social media.

Hi @TheRickWilson, not sure if you realize, but your wife posted this on Instagram. May want to delete that one too! pic.twitter.com/ISg1xUVS1u

Rick’s wife’s social media turned out to be a treasure trove of racist, xenophobic and homophobic garbage – all of the things that Rick and his NeverTrump cohorts falsely accuse President Trump of being guilty of.

The inherent danger in Rick’s high wire live-by-the-sword, die-by-the-sword routine was always that he would eventually toss a loaded grenade that would blow up in his face. We have always known that Wilson was everything he claimed to hate about Trump – a petty, vicious, thin-skinned vulgarian.

The left-wing media has always been willing to overlook Wilson’s hypocrisy. They view him as a useful idiot in their never-ending campaign to destroy President Trump.

Will The Left-Wing Media Overlook This?

In today’s racially charged environment, as Confederate statues are toppled and every symbol of the Confederacy is being scrubbed from the nation, will the left-wing media be willing to overlook this grossest of Wilson’s hypocrisies?

If Gone with the Wind and Aunt Jemima deserve to be cancelled, shouldn’t Wilson?

One thing is absolutely certain, Wilson’s implosion has been delicious to watch. Pull up a seat on social media and grab the popcorn – cancel culture might finally do us a favor.