They Cried For Babies Last Week, Now They Cry For Not Being Able to Abort Them

The hypocrisy of the left can sometimes play out over months or years, making it hard to see, but it’s always there.

Other times, it can play out in the span of just days or weeks.

That’s what happened in June. After Justice Kennedy announced his retirement from the Supreme Court, the left’s greatest fear played out before their eyes – the possibility that Roe v. Wade, the landmark case giving women the ‘right’ to abort babies, could legitimately be overturned in our lifetime.

The meltdown was in full effect.

Time Magazine declared that, “If Roe v. Wade goes, no woman’s body will be her own.”

Others were equally concerned and oblivious to the life of the child.

If Roe is overturned, abortion will be illegal in 24 states – likely more https://t.co/ZWDB3eDHBT

Don’t take our word for it. Anti-abortion groups are explicitly saying this seat is the moment to overturn Roe. THIS is what’s at stake. #SaveSCOTUS https://t.co/onvDdCDR6U

Stock up on abortions now. Roe v. Wade is gone.

They’re borderline apoplectic over the right to terminate the life of a child.

Anybody have any idea what they were apoplectic over the week before? 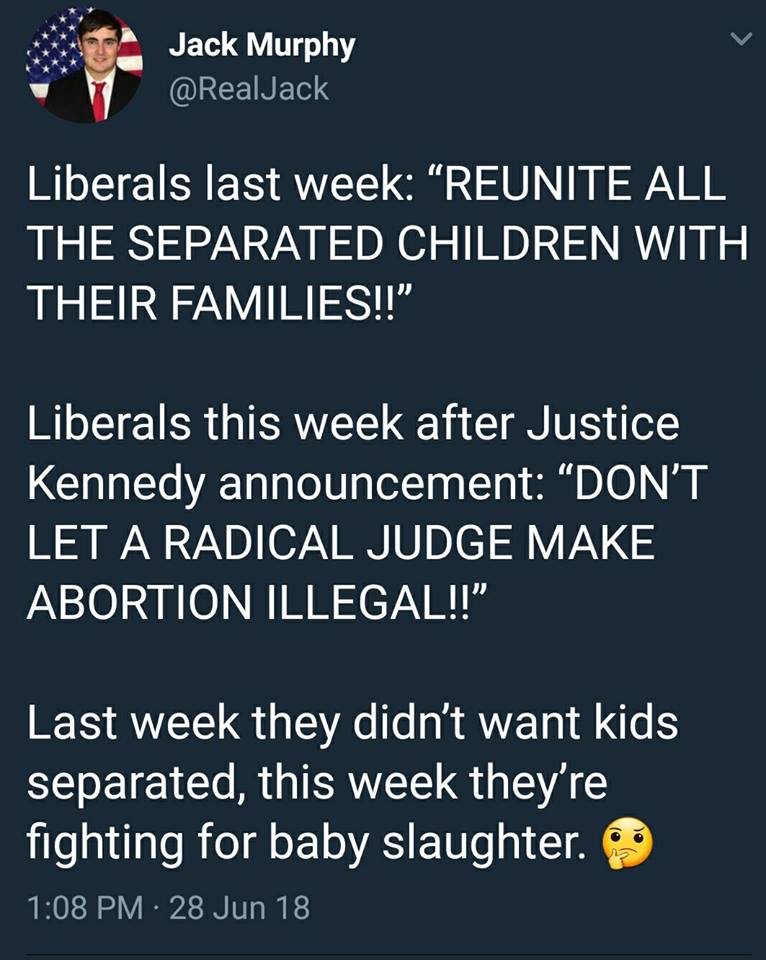 That’s right – liberals were up in arms and doubled over in tears at the thought of illegal immigrant children being separated from the adults that brought them on a criminal adventure, endangering their lives.

Remember Rachel Maddow, the MSNBC host who broke down in tears on her show, forcing her to end it early before she could read the Associated Press report she was supposed to close the show with? The same Rachel Maddow who didn’t give a damn when Obama was carrying out the policy on a far larger scale?

“Trump administration officials have been sending babies and other young children,” she said, fighting back tears.

“Can we put up the graphic of this?” she asked of the report, becomes increasingly emotional before adding: “I think I am going to have to hand this off.”

Rachel Maddow chokes up and cries on air as she struggles to deliver news that migrant babies and toddlers have been sent to “tender age” shelters pic.twitter.com/O6crm8cvyR

Babies. She was concerned about babies.

The following week, upon hearing news of Kennedy’s retirement, she’s been retweeting messages fretting over abortion rights being ended. Or more accurately, the ‘right’ to kill babies.

They seem like crocodile tears in retrospect, don’t they?

Each liberal who cried tears of sadness when children were being processed as they were taken against their will across the US border illegally needs to face their own hypocrisy now that they cry over the right to abortion.

Liberalism truly is a mental disorder.

Let’s Be Clear: Journalists Wanted to Blame Trump for the Maryland Newspaper Shooting

While Biden is Celebrating Lavishly, Here’s How Much More Expensive Your Thanksgiving is Going to Be