The media’s campaign of disinformation regarding President Trump’s now-rescinded “zero tolerance” immigration policy has never been worse. Looking back, we’ll regard the whole sensationalist episode as the nadir of journalistic integrity.

That the media steadfastly refused to report on the locking up of illegal immigrants in makeshift cages years ago during the Obama Administration was bad enough. (RELATED: Surprise: Obama Kept Illegal Families in ‘Deplorable Conditions’ As a ‘Deterrent’).

Now abuse scandals that occurred under Obama’s watch are being blamed on Trump. According to the Associated Press, “Immigrant children as young as 14 housed at a juvenile detention center in Virginia say they were beaten while handcuffed and locked up for long periods in solitary confinement, left nude and shivering in concrete cells.”

How do they know this? From federal court filings. One 15-year-old Honduran immigrant boy claims to have been strapped down naked and a bag was put over his head. Some of the minor detainees were seen with broken bones and bruises.

Here’s the important part of the AP report after the listing of the specific abuses:

Many of the children were sent there after U.S. immigration authorities accused them of belonging to violent gangs, including MS-13. President Donald Trump has repeatedly cited gang activity as justification for his crackdown on illegal immigration.

Trump said Wednesday that “our Border Patrol agents and our ICE agents have done one great job” cracking down on MS-13 gang members. “We’re throwing them out by the thousands,” he said.

So, after detailing disgusting abuse against minor illegal immigrants at the hand of detention facility guards, the AP report instantly pivots to President Trump’s language on MS-13, despite admitting the abuse didn’t occur during the Trump Administration.

Many of the abuse allegations stem from a 2016 lawsuit – which occurred during the Obama Administration. And isn’t it funny that the word “Obama” isn’t mentioned once in the article?

Immigrant children at detention center sue for 2015 and 2016 abuses including being strapped to a chair naked with sack over head.

Justin Miller is the national editor of the Daily Beast, a website named after a sham publication in Evelyn Waugh’s novel “Scoop,” which spoofed journalism as a profession of cowards and fabulists. In that tradition, Miller tried to claim that the abuse detailed by migrant minors occurred because of Trump.

The tweet, which will likely be deleted soon, has been screencapped below: 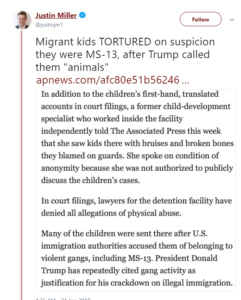 After being called out on Twitter, he tried to specify his claim:

I should’ve said “who Trump calls animals,” not “after.” The point remains the same: torturing people because they are suspected of gang activity, which the CURRENT president says makes them less than human

Nice try, Justin. You’re still a hack and a liar.

Of course, we all know the purpose of this. It isn’t to highlight the truth. It’s to push a narrative, gather a bunch of attention, then quietly delete it or issue a mea culpa, while everyone else riled up by the original false claim continues to believe it.

I look forward to the correction to this tweet, which will get 19 RTs as this one gets 15k. https://t.co/TqeLEut1Ef

Garbage in, garbage out. Just another day for the liberal media.

President Trump Mocks Protester Sporting a Man-Bun: ‘Is That a Man or a Woman?’