Dr. Eugene Gu was among those responsible for one of the most frivolous lawsuits of the year, suing President Donald Trump for blocking him on Twitter. (RELATED: Lawsuit Filed Against Trump’s Twitter Account Dismissed).

Couldn’t someone simply override the block by making a secondary account, or simply logging out of their account before viewing Trump’s feed? Yes, but apparently Gu opted for a lawsuit to draw more attention to himself. He somehow won the case, and tens of thousands of dollars in legal fees later can view Trump’s Twitter feed at his own convenience. Thanks in large part to publicity from the lawsuit, Gu boasts over 200,000 Twitter followers.

And that publicity turned sour once another Donald Trump got involved. It all started with a Twitter user who began looking into Gu’s criminal record, finding a public arrest record showing charges of false imprisonment by violence and battery of a spouse. 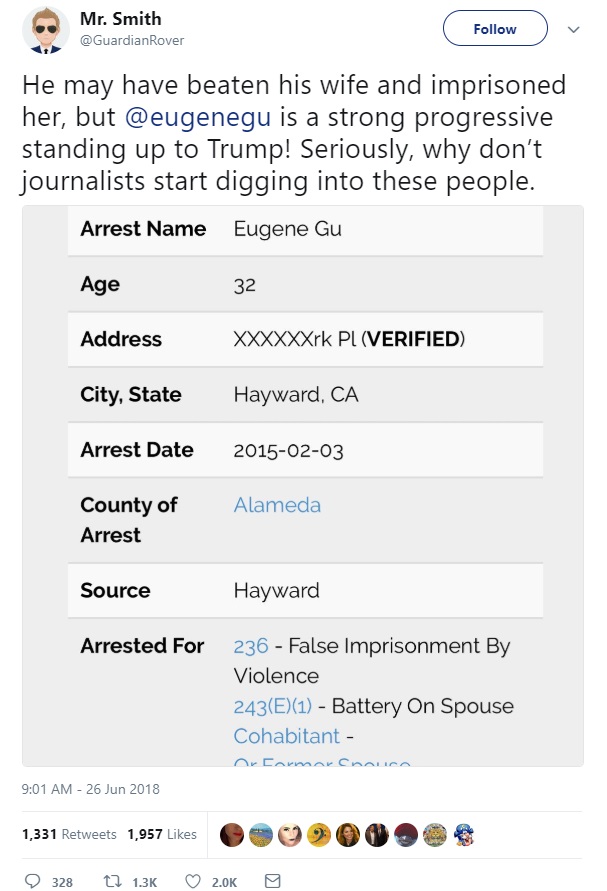 Donald Trump Jr. retweeted the allegations, asking “Is this real? Wow, could this be the resistance? MD, Social Activist, Wife Beaten???” In another tweet, he wrote “I guess this explains all his virtue signaling??? If accurate, I wonder if the hospital there Eugene Gu works is aware or if they have comments? If I were a patient I would surely want to know.” News of the arrest record then spread like wildfire through social media.

Gu has denied any wrongdoing and says the charges were dropped. But before his followers had time to forget the allegations, an ex-girlfriend from after Gu’s subsequent divorce is coming forward with some allegations of her own, some of them similar.

“I’m freaking out now knowing my ex-boyfriend was tormenting me with a fake female (Twitter) account. Sending me messages obsessing over him, asking intimate details about my sex life, and then trying to convince me they slept together. I’m going to be sick,” she wrote on Twitter, under the username @DoctorMeowskis.

In the tweets that followed, she outlined how she and Gu met and began dating in early 2017. Gu found her on Twitter through a community for women in the medical community that she created, and “He started texting me frequently and it wasn’t long before he said we’d be Twitter’s power couple,” she said. It wasn’t long after they started dating that she began getting messages from someone falsely claiming to be another female doctor.

“Around this time I started getting messages from a girl who claimed to be an ENT surgeon. I always have looked up to doctors and she was friendly…Things soon became really weird with her… All this time she was prying if I was dating this surgeon, I told her no because I don’t want my dating life all over Twitter until I’m ready to post about it. She then said he was going to be her next conquest. Though I always had an eerie sense she knew we were dating.” The fake account, controlled in reality by Gu, began sending increasingly sexual messages.

These are some of the screenshots. Remember I didn't want "her" to think I was dating the surgeon so I tried to play it cool. I did tell "her" that I heard he was seeing someone, trying to dissuade "her" pic.twitter.com/N178Y3NccH

The fake account had the username “Mary Laury MD,” and also had some disturbing public posts. One mocked someone for only having twitter followers that were either white or autistic. Another apologized to white people for “conquering” them, adding that “My family lives in wealth over your trailer park people slaving for us every day!” A pretty bizarre choice of words for a racist comment, for sure, and it gives some insight into Gu’s character when he believes himself to be anonymous.

At this time their “dating” was merely an internet relationship through Twitter. After a couple of months of talking, Gu invited her to visit him and said she could shadow him at work, according to her posts. She says that when they met in person, Gu was much more immersed in his smartphone’s Twitter feed than in her. Nearly all of Gu’s posts have to do with left-wing activism. 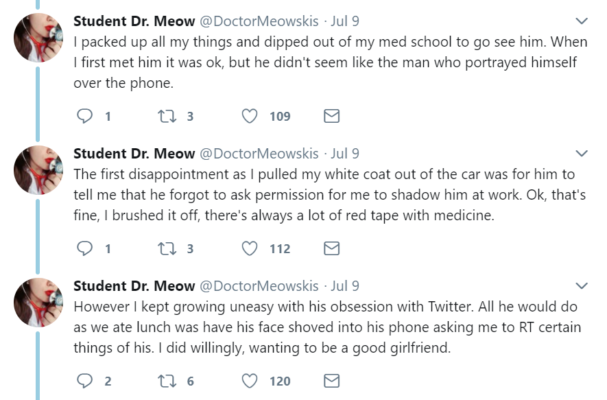 @DoctorMeowskis spent the next few days in his apartment and finally had the chance to go out on a date with him on Valentine’s Day.

The two returned to his apartment, where she said Gu forced himself on her. Gu, by the way, is public about his support for the anti-sexual harassment “#MeToo” movement. I guess he was overcompensating for some guilt… 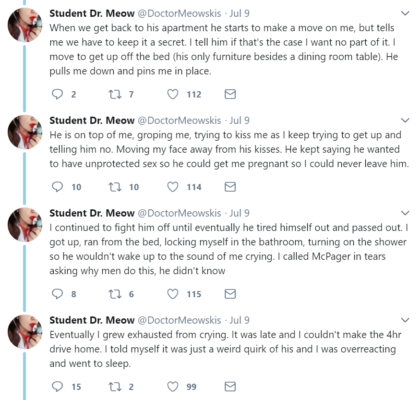 The overwhelming response to these new allegations could prove them to be the final nail in the coffin of Gu’s side-gig as a liberal e-celebrity. After all, while the allegations of sexual misconduct are “he said, she said,” it’s already been verified that he had harassed his own girlfriend (and others) through a fake account while the two were dating. It goes without saying that kind of manipulative behavior is never a good look, and it detracts him his credibility in denying the more series allegations against him.

In case you didn't catch my earlier RT, Eugene Gu sexually assaulted and emotionally manipulated his ex, and impersonated a female doctor on Twitter to harass her and pry into her sex life. He used the same fake doctor account to falsely accuse a different doctor of racism.

Gu announced that he’d be taking a break from Twitter in response to the “emotional devastation” he’s faced due to the allegations. He also revealed that many have asked him to “Anthony Bourdain” himself.

Past few weeks have been so emotionally devastating for me. Many have asked me to “Anthony Bourdain myself.” I know public figures are supposed to handle whatever attacks come our way, but sometimes things are just too much for a human being. I’ll be taking a break from Twitter.

Poor Gu is probably wishing that his 15 minutes of fame ended long ago, but this anti-Trump doctor likely will have no longer have any influence in the public discourse for awhile.