The relationship between former FBI agent Josh Campbell, the cable news network and Campbell’s seemingly close history with former boss James Comey, have raised a number of questions from these agents over the propriety of Campbell’s new job.

“What can [Campbell] contribute? I don’t think that he would be someone who could offer any type of, really, knowledge about what law enforcement analysts are, because, what is his experience?” said former Special Agent Jack Garcia, a 26 year FBI veteran.

“Something smells so bad about this whole thing.”

Garcia and another 25 year veteran of the FBI noted to TheDCNF that Campbell’s mere 10 year career was largely marked by time spent at headquarters and that he lacked field knowledge to accurately represent the bureau. Campbell’s last job in the FBI was spent in a media relations role out of the Los Angeles field office.

His last day at the bureau was Jan. 29 where his official flyer, obtained by The Daily Caller, reveals he understood his future role at the network as a position to “defend the bureau.” CNN describes him merely as a “law-enforcement analyst.”

EXCLUSIVE: I obtained a copy of former @Comey assistant @joshscampbell's goodbye flyer at the FBI. It invites attendee's to "celebrate his new endeavor defending the bureau as an LE analyst at @CNN" https://t.co/JgjzVSJd1m pic.twitter.com/BXStmSgzcq

The flyer includes a photo of Campbell at the set of CNN New Day in New York City despite his job posting at the Los Angeles field office at the time.

Campbell’s online history, reviewed by TheDCNF, shows a reverence for CNN and Comey. Since joining CNN, Campbell deleted his personal website, which included numerous photos of himself with Comey. In the sites featured image, it shows a photo of himself sitting behind the director during congressional testimony which Comey delivered after President Donald Trump fired him.

Campbell appears to have attended the testimony with his future CNN colleague and former U.S. Attorney Preet Bharara. 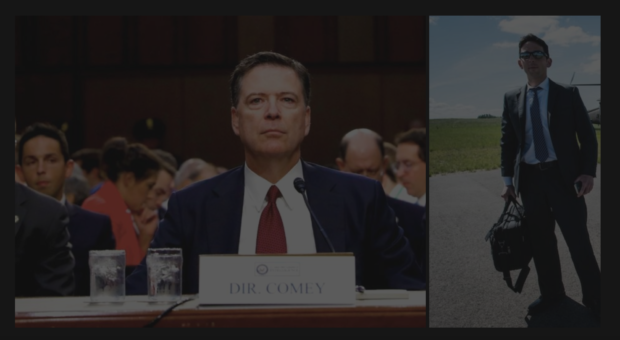 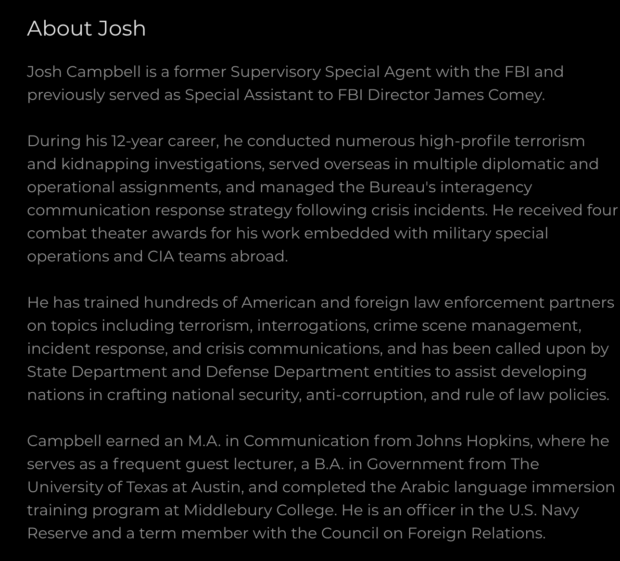 Individuals who worked at the FBI during Campbell’s time greatly dispute this characterization.

One former 25-year veteran agent, who asked TheDCNF to remain nameless, said Campbell, 34, “did the minimal amount of time he could before retiring. Any idea that he is some seasoned agent … is ludicrous — he just isn’t that.”

“He sees himself as a star. He hasn’t been part of our brotherhood, he doesn’t understand how we feel.”

Comments on Campbell’s LinkedIn profile corroborate the described sense of anger by other agents. 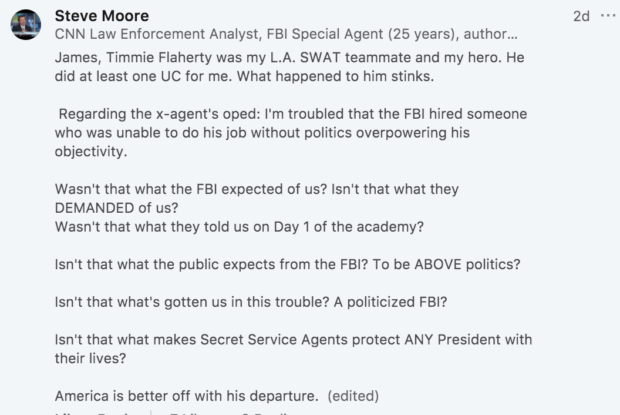 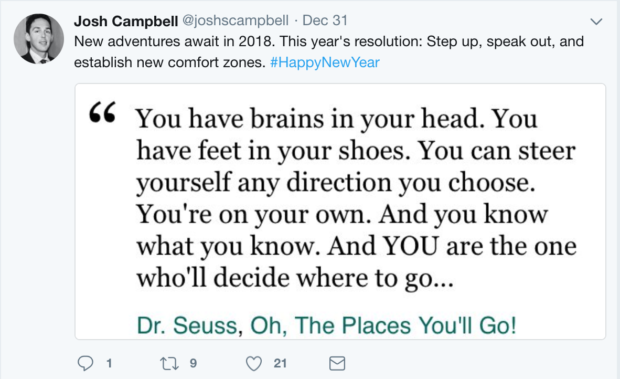 The day after his tweet he “liked” the network’s infamous ad comparing Apples to Bananas on New Years Day and encouraged people to donate to CNN’s Heroes campaign.

Campbell noted in late January that he was proud to stand behind his fired former boss and called him a “true public servant.”

Both Campbell’s presence at the Comey hearing and much of his social media activity occurred while he was still an employee at the bureau. This raises questions about their relationship following the former FBI director’s termination. It remains unclear why he attended his former bosses’ hearing while an active agent.

The young agent also took the extraordinary step of publishing an op-ed defending Comey after his firing in USA Today, calling him a “servant.”

“[Comey is] a giant of a man with an even bigger heart, whose focus was always on trying to understand and improve the lives of others,” Campbell wrote while still a member of the FBI in an op-ed for USA Today. FBI veteran agent James Gagiliano noted in an op-ed for The Hill that such outspokenness was baffling given his low rank.

“What struck me odd at the time — having retired in 2015 after serving for 25 years in the FBI agent and executive management ranks — was this: Who afforded a GS-13 bureau employee the privilege to have a personal opinion piece published?” Gagliano said of the op-ed.

Months later, on Feb. 2, Campbell published a separate op-ed in The New York Times, describing why he was resigning from the bureau. He also complained in the piece about how the agency had become a political target, which drew much of the criticism by former agents seen on Linkedin.

Comey almost immediately shared the column on his personal twitter account and said Campbell’s” voice is an important addition to the national conversation.” On Monday, Campbell premiered on CNN.

Special Agent Josh Campbell will be missed at the FBI, but his voice is an important addition to the national conversation. @joshscampbell https://t.co/TETeRrou8C

“I have never seen a director of the FBI tweet out praise for an employee, especially a junior employee like Josh Campbell,” said Garcia. “That’s unheard of.”

Given Campbell’s inexperience at the FBI and relatively young age of 34, a DCNF source with close ties to the FBI alleges that Comey had a direct hand in securing his new CNN position in return for an exclusive interview. A Fox News report published Wednesday alleges a similar type of deal between the parties.

CNN has not disclosed Campbell’s previous history with Comey, nor did it respond to several requests for comment from TheDCNF.

Comey, who has faced repeated scrutiny from both parties over his handling of both the FBI’s criminal investigation into former Secretary of State Hillary Clinton’s private email server and its ongoing probe into possible Russian electoral meddling, benefits greatly from a close confidante on a major news network — particularly in the wake of an upcoming Inspector General report reviewing the agency’s handling of these cases.

As TheDCNF reported earlier this week, CNN has repeatedly relied on anonymous sourcing within the FBI for its stories.

The former agents who spoke to TheDCNF expressed bewilderment that an active agent would so nakedly share his relationship with a news outlet, with the most conspicuous example being his party flyer showing him sitting in a CNN studio.