The outrage from the leftover child separations at the southern border – many of whom are being accompanied by adults who are not their parents and are thus being endangered – is at a fever pitch.

How can a party who once voted to cast God out of their platform three separate times, and a party that openly supports the ultimate separation of a child from their mother – abortion – suddenly express outrage over how to handle the children?

How can a media that openly scoff at religious Americans (Joy Behar comes to mind) suddenly start quoting the Bible to argue for better treatment for these illegal immigrant families? (RELATED: Joy Behar Finally Apologizes for Mocking Christians).

The hypocrisy is mind-numbing. Nowhere is that hypocrisy more aptly demonstrated than with the political cartoon below … 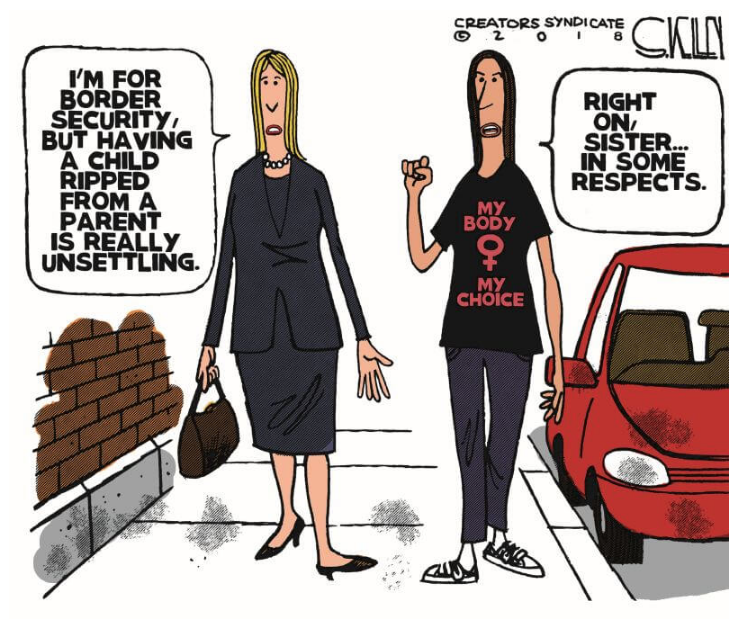 Keep this in mind going forward, the same people who constantly preach about ‘my body, my choice’ as a means to justify abortion are the same people arguing that children shouldn’t be separated from adults who have committed child endangerment by having them as accompaniment during a criminal act.

There is no issue in which Democrats aren’t willing to use children as political pawns.

Mike Huckabee, former governor of Arkansas, summed it up in a tweet in which he explained as much.

“I don’t like immigrant children being temporarily separated from parents,” he wrote, “but where is outrage over PERMANENT separation of a child and mother when the baby is ripped apart in the mother’s womb by knives of abortionists?”

I don’t like immigrant children being temporarily separated from parents, but where is outrage over PERMANENT separation of a child and mother when the baby is ripped apart in the mother’s womb by knives of abortionists?

Liberals are embarrassingly conflating the normal relationship and life of a child and its parents with that of people using children as shields in their quest to gain entry into the United States. With people placing them in harm’s way by crossing at illegal points of entry into America, risking their lives. (RELATED: DHS Secretary Hammers Misinformed Liberals Over Family Border Policy).

This misreporting by Members, press & advocacy groups must stop. It is irresponsible and unproductive. As I have said many times before, if you are seeking asylum for your family, there is no reason to break the law and illegally cross between ports of entry.

The government is rightly stepping in, as would be the case for any people risking the lives of children.