Bill Maher invited on pro-gun control Parkland school shooting survivors David Hogg and Cameron Kasky on his show in early March, but he turned his criticism on one of them on Friday night’s show.

Near the end of March, Ingraham tweeted out a Daily Wire article about Hogg being rejected by four colleges. She added her own commentary: “David Hogg Rejected By Four Colleges To Which He Applied and whines about it. Dinged by UCLA with a 4.1 GPA…totally predictable given acceptance rates.” An insensitive (and pretty pointless) comment – but nothing to freak out over.

Unless you’re David Hogg and company. Almost immediately Hogg directed his followers’ attention to the tweet and tweeted out a list of her sponsors to target. 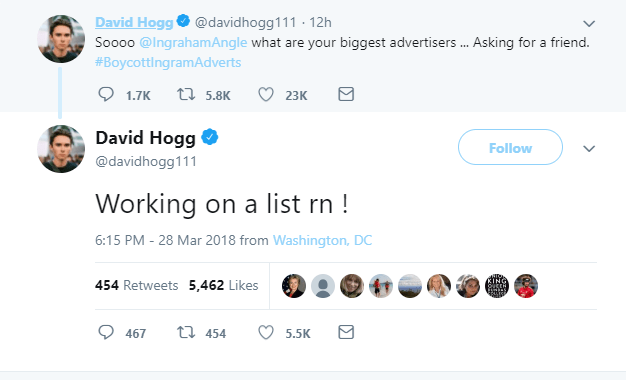 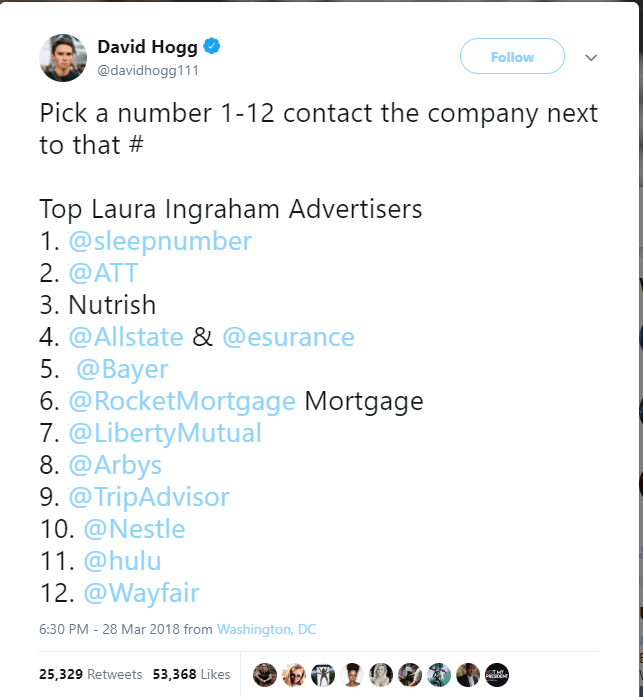 While a devout liberal himself, Maher rightly doesn’t see the issue of free speech and free expression as an ideological issue. If a conservative saying the wrong thing can cost them their livelihood, the same thing can happen to a liberal. Maher had once gotten fired from a show he previously hosted in 2002 for some off-color remarks. Ironically, that show was called “Politically Incorrect.”

According to The Blaze

Maher said he wishes the students success because they’ve brought more attention to the gun control issue, but explained that because the kids put themselves in the “public arena,” people have the “right to argue back.”

As Maher was explaining the situation, noting that Hogg called for a boycott of Ingraham’s sponsors, some members of the audience began to clap and cheer. Then Maher snapped.

“Maybe you shouldn’t say that about a 17-year-old, but again, he is in the arena. And then he calls for a boycott of her sponsors. Now, really, is that American?” Maher asked. “Effectively, it is the modern way of cutting off free speech.”

Maher said that while he believes Ingraham is a “deliberately terrible person” who has a history of saying “horrible things,” she shouldn’t be a victim of a boycott.

What do you think? Did Maher’s defense of Laura Ingraham surprise you? Let us know your thoughts in the comments section below.

Pelosi Unravels – Shuts Down Reporter Who Asked About Biden’s ‘Corruption’