While the legal and illegal immigration debate rages on, conservative talk show host Mark Levin has proven a source of reasoned, rational, and intelligent debate on the matter.

During his speech at the 2015 Conservative Political Action Conference, the nationally syndicated talk show host nailed the common misconception pushed by the left that America is a nation of immigrants.

The phrase dates as far back as 1874, in an editorial published in The Daily State Journal of Alexandria. In it, the author wrote that “We are a nation of immigrants and immigrants’ children.”

Immigration advocates have since used the phrase to push their cause, a blurring of the lines between legal and illegal immigrants.

Levin put a squash to that during his speech, explaining that we are not a nation of immigrants, but rather, a nation of law-abiding citizens.

“We are a nation of citizens,” he declared to thunderous support, “and I’m sick and tired of the American citizen being demeaned and treated as second-class citizens while anyone who crosses the border is treated as the most virtuous human being on the face of the earth.”

The illegal immigrant-loving left has gone so far in their pursuit to support people they consider to be a prime voting bloc, that they now prioritize the lawbreakers rather than the law-abiding citizen.

It is a travesty of reason and sanity. 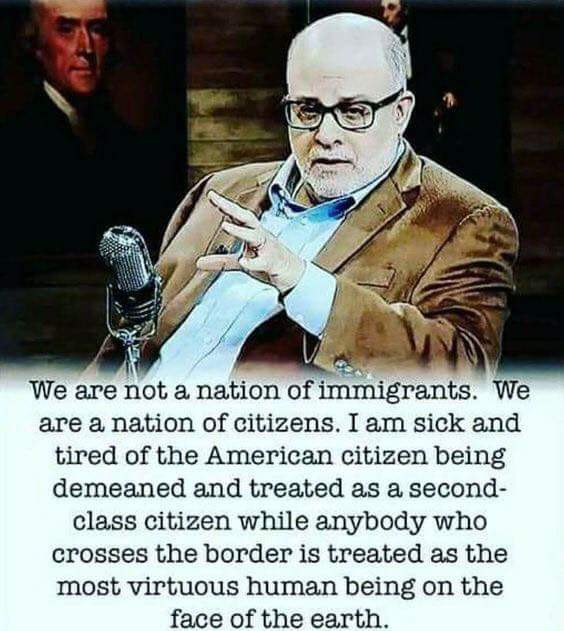 Fox News host Laura Ingraham recently found herself in hot water when she commented on legal immigration and how it was changing demographics in America.

“In some parts of the country, it does seem like the America that we know and love doesn’t exist anymore,” she said during an opening monologue earlier this month. “Massive demographic changes have been foisted on the American people, and they’re changes that none of us ever voted for, and most of us don’t like.”

While most Americans support legal immigration, it is based on the contingency that those immigrants adapt to American laws and culture.

Laura Ingraham defends “demographics” comments, saying her remarks “had nothing to do with race or ethnicity.”

“We are melting pot. I know she has no problem with that. She has a daughter, she adopted from Guatemala.” – Women for Trump Co-Founder and Chair, Amy Kremer pic.twitter.com/NTGCea0MRj

In February, the U.S. Citizenship and Immigration Service (USCIS) removed the phrase “nation of immigrants” from its mission statement, instead focusing on their job to promote legal immigration “while protecting Americans.”

The Wall Street Journal recently reported that the Trump administration has been taking a stricter look at legal immigration laws as well as their very public push to decrease illegal immigration.

“The Trump administration is taking myriad steps to reduce legal immigration,” they wrote. “Some of these quieter steps are being made through new policies or a stricter interpretation of existing regulations.”

Michael Cohen’s Plea Deal Is ‘Not Nearly As Deadly’ As it Looks, Says Alan Dershowitz