Since long before his now-famous descent on the escalator at Trump Tower, which kicked off his campaign for President, Donald Trump has been the king of memes.

It’s still strange to think about – how a septuagenarian billionaire could so easily capture and repackage the zeitgeist and imaginations of Joe Six-Pack. The man just has a talent for it.

And if he took a little break after his tragic defeat in 2020, it should be clear by now that he’s back on top of his game and hasn’t lost a step.

RELATED: Tuesday Was A Huge Night For Trump – And J.D. Vance

Return of The Great MAGA King!

Earlier this week, Joe Biden, aka Jimmy Carter II, thought he had a great insult to level at his predecessor.

At a fundraising event in the failed state of Chicago, Biden did his level best to whip up enthusiasm for the 2022 midterms, which by all indications are shaping up to be a bloodbath for Democrats.

Apparently, some pollster or consultant has convinced Biden and his team that “ultra-MAGA” is an effective insult to levy at Republicans. It will be interesting to see how that bears out over the next few months.

And Trump wasted no time taking it up.

Biden’s pollsters also evidently believe that Biden can run as the ‘fiscally responsible candidate,’ because he said, “Under my predecessor — the great MAGA king — the deficit increased every single year he was president. The first year of my presidency, the first year, I reduced the deficit.”

Right then and there, The Great MAGA King was born, and Trump proudly took it up: 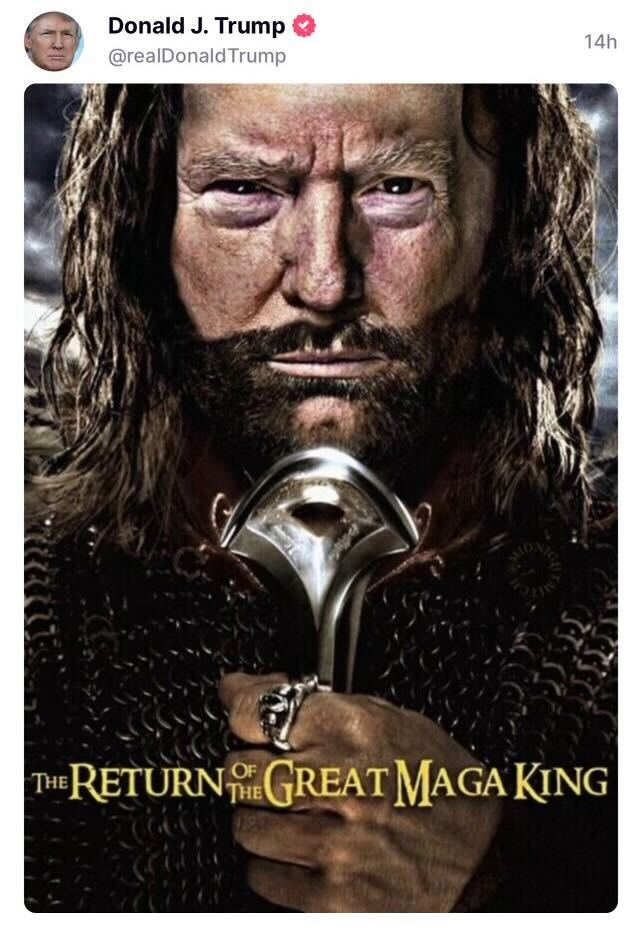 Posting on his new Truth Social platform, Trump endorsed the nickname, with a photo of himself as Aragorn, the man who became King of Gondor in J.R.R. Tolkien’s “Lord of the Rings” epic.

RELATED: Trump Fires Back at ‘Lightweight’ Former Defense Secretary Mark Esper: ‘I Had to Run the Military Myself’

Following his permanent ban from Twitter after the Capitol riot, Trump had vowed to create his own free speech social media platform.

Truth Social was eventually launched in February of 2022. The platform has had some issues. This author was initially on a waiting list, and when my number finally came up, there was another entire month of error messages before I could finally sign on to the platform.

The future of Truth Social also got hit with another curveball: Elon Musk’s upcoming (possible) purchase of Twitter.

Musk has said he would reverse the permanent ban of Trump on Twitter – which may prove entirely too tempting to reject.

Trump has said he’s sticking with Truth, but if he decides to run for President again in 2024, I’d bet whatever might be left of my savings by then that Trump will be back on Twitter to terrorize the pearl clutchers and journalists.

JP Morgan Warns Gas Prices About To Get Much, Much Worse