Back in 2013, former Starbucks CEO Howard Schultz got himself in some trouble for comments he made to investors in the company who may disagree with its progressive values. “If you feel, respectfully, that you can get a higher return than the 38% you got last year, it’s a free country. You can sell your shares in Starbucks and buy shares in another company. Thank you very much.”

There’s no denying the arrogance in his comment, which is humorous given the company’s recent stock performance. After a healthy run from the end of the financial crisis until mid-2015, Starbucks’ stock has flat-lined while the rest of the market is soaring under Trump. 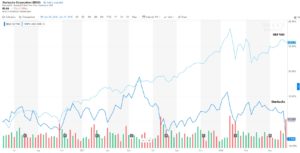 As you may have noticed, the stock dipped off recently, and that’s following an incident unnecessarily made about race when two black customers were removed from the store after not making a purchase. They also had wanted to use the restroom without making a purchase.

Starbucks threw the manager that was simply following the store’s rules under the bus and accused her of racism (she’s now suing the company). To remedy the situation that didn’t need it, Starbucks closed all their stores for a single day at the end of May to force their employees to sit through “racial bias training” videos. (RELATED: Eric Holder Will Help Train Starbucks Employees on ‘Racial-Bias Education Day’).

The store also changed their policy so that a purchase isn’t required to sit in the store (or use the restroom). Starbucks says this is part of their devotion to being a “community space,” which is a bit odd because their shareholders are under the impression that they’re a company that exists to make money. (RELATED: Starbucks Once Refused to Let A Cop Use The Restroom, No One Cared).

And according to the Washington Examiner, “The coffee giant’s stock took a tumble Wednesday after CEO Kevin Johnson announced that Starbucks would close 150 company-owned stores next year instead of the expected 50, with an emphasis on underperforming shops in densely populated urban areas, and lowered growth projections.”

Starbucks’ CEO Kevin Johnson acknowledged that the pointless controversy the company faced played a role in their performance. “In this current quarter, certainly we had an unplanned initiative driven out of the Philadelphia incident, we closed all our stores for training, we had to delay some marketing, but none of that is an excuse.”

Starbucks “open borders” policy will also create other problems for the company. One of the most obvious unintended consequences is that it’ll make the stores in certain areas havens for the homeless. Not only can that deter customers, as CNBC’s Jim Cramer noted, it could require Starbucks to hire an additional employee to monitor bathrooms for drug use.

Perhaps Starbucks should stick to coffee instead of pushing a liberal agenda that causes them nothing but headaches and bad publicity.