The gun-grabbing left, Democrats, and the media (we know, they’re the same) have been focused solely on the weapon being used in mass shootings like that in Parkland, Florida, not on the vulnerable targets they’ve created with their gun-free school zone fantasies.

President of the NRA, Wayne LaPierre, pointed out a significant flaw in this way of thinking, and why it is vital to start protecting our children when they are in school.

The following cartoon by the esteemable A.F. Branco couldn’t illustrate this any more clearly. The next shooter in this country is going to think twice if they’re given a choice – an armed and protected school on the left, or a liberal dream come true on the right. 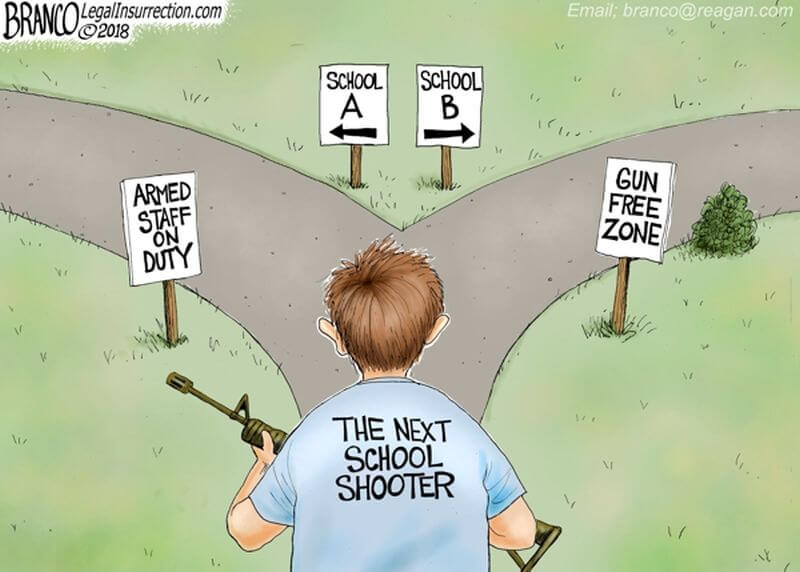 Which path do you think the next school shooter will choose? The soft target, of course.

Which is exactly what schools in America have become ever since the implementation of the Gun-Free School Zones Act, legislation introduced by former Vice President Joe Biden and signed into law in 1990.

“The world has changed,” Branco writes. “We can either protect our kids or leave them as sitting ducks for the next school shooter.”

America needs to head down the path on the left, towards armed, properly-trained personnel on school property.

We need to “look at the possibility of giving concealed guns to gun-adept teachers with military or special training experience – only the best,” the President tweeted.

“A lot would now be able to immediately fire back if a savage sicko came to a school with bad intentions,” Trump continued. “Highly trained teachers would also serve as a deterrent to the cowards that do this.”

Such a plan would allow for “far more assets at much less cost than guards,” he said, adding “A ‘gun free’ school is a magnet for bad people.”

I never said “give teachers guns” like was stated on Fake News @CNN & @NBC. What I said was to look at the possibility of giving “concealed guns to gun adept teachers with military or special training experience – only the best. 20% of teachers, a lot, would now be able to

….immediately fire back if a savage sicko came to a school with bad intentions. Highly trained teachers would also serve as a deterrent to the cowards that do this. Far more assets at much less cost than guards. A “gun free” school is a magnet for bad people. ATTACKS WOULD END!

Patrick Neville, a Republican lawmaker and survivor of the Columbine shooting in 1999, said “Time and time again we point to the one common theme with mass shootings, they occur in gun-free zones.”

If we start adding armed staff to all of these schools, as Branco shows in his cartoon, the next school shooter will be forced to go down that path, and their chance of carrying out any carnage will diminish significantly.

Protesters Break Into Private Neighborhood… Then Armed Residents Fought Back

Do you think schools need armed staff in them to stem the violence? Share your thoughts below!